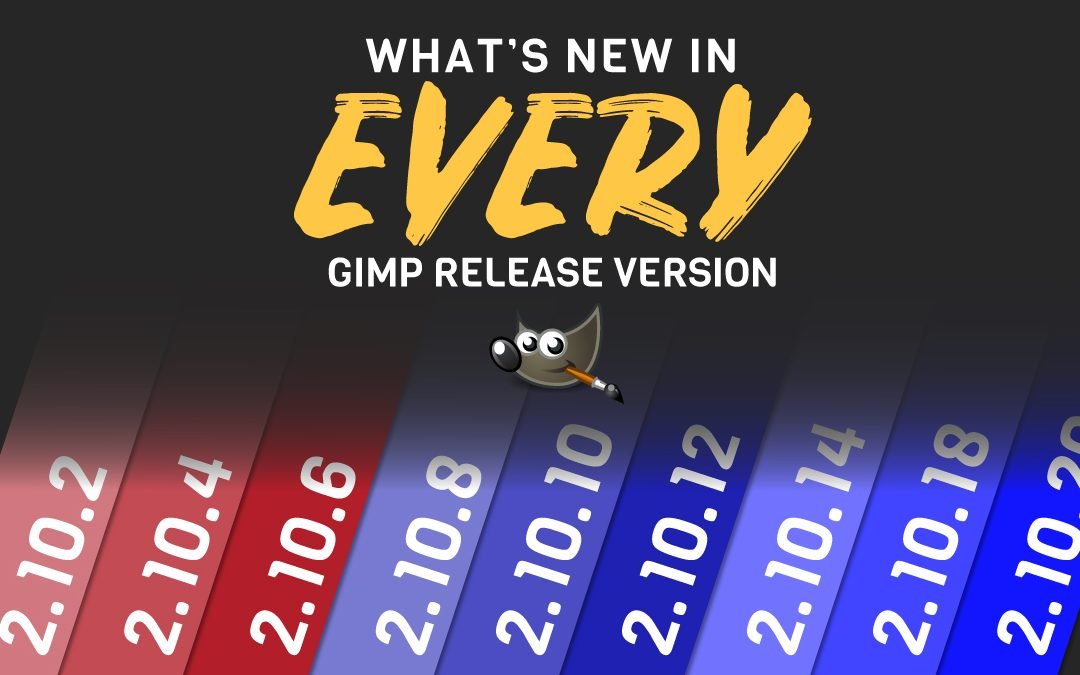 Over the years, I’ve released videos covering all the important new features from GIMP 2.10 release versions as they were announced. In this list, I’ve compiled all those videos to make it easy for you guys to review each new feature from GIMP 2.10 through GIMP 2.10.20 – and everything in between!

This GIMP video tutorial list kicks off with my video on the top 10 new features that came with the first major release version of GIMP in 8 years – GIMP 2.10. When this version came out, it flipped the photo editing and photo manipulation world on its head. Though it may not have “killed” Photoshop, it definitely showed that Open Source is not only here to stay, but also a legit competitor to premium software. From the introduction of GEGL as the major engine behind GIMP’s filters, to myriad performance improvements, GIMP 2.10 was and is to this day truly a game changer!

GIMP 2.10.2 was the first update to the GIMP 2.10 series – and it added some great new features along with bug fixes. This version saw the debut of the Recursive Transform filter, as well as some other great additions.

GIMP 2.10.4 brought us the “Straighten” feature inside the measure tool – which allows you to straighten out crooked photos by tracing a horizon line and clicking a button. It also improved upon the Recursive Transform tool, tweaked the “Unsharp Mask” filter, and improved GIMP’s performance via asynchronous font loading.

This next release version, GIMP 2.10.6, which quietly came out in August of 2018, contained some of today’s most popular filters. This version introduced the “Little Planet” and “Long Shadow” filters, both of which I named in my Top 10 GIMP Filters tutorial. It also saw general improvements to translations and elements of the UI (User Interface).

GIMP 2.10.8 was mainly an updated involving general performance improvements and bug fixes, but it also saw the introduction of the hard-edge gradient feature for creating abrupt color changes with the gradient tool. Other general improvements were made to the text and selection tools, along with the support of new color spaces.

GIMP 2.10.10 is another one of the GIMP updates that contained some sneaky-good features, like the on-canvas layer selection for finding any layer with a simple shortcut key, the debut of the smart colorization feature for coloring in hand-drawn lines (though this feature was still rough around the edges in this release version), readjust handles for transform tools, and a major step towards non-destructive editing (the introduction of the “sample merged” feature).

In this GIMP tutorial, I show you all of the important new features found in the latest release GIMP 2.10.12. From the new Offset feature, to improvements made to the Curves tool, to moving two intersecting guides simultaneously, there’s a ton of great new features that come with this version!

GIMP 2.10.14 is definitely in my Top 3 for best release versions of GIMP of all time. With its release came my personal favorite filter – the Newsprint Filter – as well as one of the most important features introduced in GIMP – the “Show All” filter for viewing pixels outside the canvas boundary. In addition to these two major improvements, it also improved filters by allowing them to extend beyond the active layer’s boundary (thus keeping filter effects from getting cut off). There was also some improvements made to popular tools and GIMP’s overall performance.

GIMP 2.10.18, which at the time of this article still has not been released for MAC, was a major update for GIMP’s UI (User Interface) as it implemented grouped tools in the GIMP toolbox for the first time. This was a major feature that GIMP users were asking for for quite some time that helped clean up the overall look of GIMP. The tool sliders were also updated to make them more sleek. Plus, the 3D transform tool was introduced in this version!

In this tutorial, I go over all the new features found in GIMP 2.10.20 – the latest release version of GIMP! I show the new Vignette filter controls, non-destructive crop tool, all 3 new blur filters (Variable Blur, Lens Blur and Focus Blur), the new Blending Options inside of GEGL filters, the new Bloom Filter, plus other various BABL and GEGL updates and GIMP 3.0 news!

On October 7, 2020 the GIMP team release what it dubbed the “File Formats Release.” GIMP 2.10.22 focused on improving its support of various file formats, as well as upgrading its core code to make future updates more seamless. The GIMP team also introduced some new features, like the “Sample Merged” option for GEGL tools that use the color picker tool. I cover all the new important features found in this latest release-version via a live stream, which you can replay via the video above.

That’s it for this list of all the new features found in each new release version from GIMP 2.10.2 to GIPM 2.10.20. You can check out any of my other GIMP video tutorials, GIMP help articles, or get more with a Premium Membership to Davies Media Design.