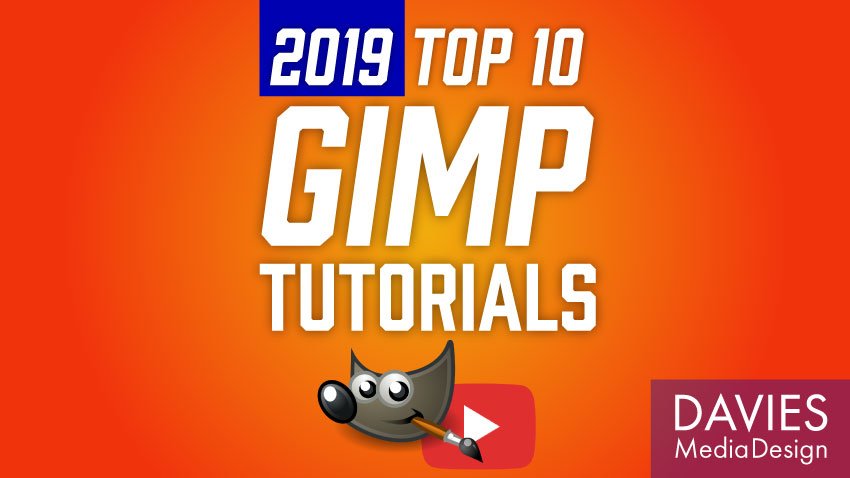 2019 has already been a great year for learning GIMP with tons of new content being released every week. With over half of the year already gone (how time flies!), I figured now would be a great time to update the Top 10 GIMP Tutorials of 2019 so far to showcase what has been everyone’s favorite tutorials. From turning any photo into a vector logo to What’s New in GIMP, and from how to recolor photos to how to replace image backgrounds, there are already tons of great videos to learn from. Without further delay, here are the top tutorials!


Editing a photo for the web is one thing – but what if you want to print a photo on paper (you mean, bring your photos into the real world as tangible objects? Yes. You read that correctly)? GIMP, at the time of this tutorial, can only edit images in an RGB space, whereas a lot of printers print to CMYK (think of those pesky Cyan, Magenta, Yellow and Black ink cartridges you have to replace all the time). This tutorial shows you how to edit your images while in a CMYK preview mode (known as soft-proofing) while providing tips on how to get the best result for print.

9. How to Blur Backgrounds in GIMP 2.10 – Shallow Depth of Field Effect


The next tutorial on this list shows you how to add a shallow depth of field to your photographs. Depth of field is a concept in photography that essentially defines that area of an image that is in focus vs. the area of an image that is blurred or out of focus. More expensive lenses produce what’s called a shallow depth of field, given your backgrounds that nice blurred look and drawing attention to your subject. I show you a super easy technique for reproducing this effect in GIMP (no expensive lens needed) to help your models pop out in photos and make your photos have more depth.

In this GIMP 2.10 photo manipulation tutorial, which has climbed up from the #9 spot to now #8 on this list, I show you how to recolor your photos using an easy but super effective technique. By combining the foreground select tool, paths tool, and layer modes, you can essentially change the color of any object (like an article of clothing) in a photo. This long awaited tutorial, which was created as a result of many requests, has received a ton of love for 2019!


If you follow my YouTube channel at all, you’ve seen plenty of tutorials where I color correct an image with the Color Balance Tool. Let me introduce you to a whole new world with this Advanced Color Correction tutorial featuring the Levels tool. The levels tool adds another dimension to your color correcting by allowing you to edit four different channels (value, red, green and blue). By editing these channels with a histogram, you can achieve some great colors in your images at real professional quality. There’s a reason this tutorial was one of my most watched tutorials of the year!

In this tutorial, which was once one of the fastest climbing tutorials on our list (at one point it was in the top 3, but has now slipped to 6 thanks to a few recent tutorials that have grown in popularity), I highlight the new features found in the latest version of GIMP (2.10.12). From improvements to the curves tool, to brand new pattern features, to the new Offset tool, there are a plethora of new features found in this 2019 update.

We have officially cracked the Top 5 tutorials of the year, and there’s a new tutorial that’s made the cut! My What’s New in GIMP 2.10.14, which was released November 1, has quickly earned the right to be one of the top GIMP tutorials on my YouTube channel. In the tutorial, I go over all of the new features found in this latest release version of GIMP (and there are definitely a ton of great new features)!


This tutorial covers the topic of converting any photo into a vector logo – a really powerful technique. I show you how this is done using the paths tool and some paint tools, while also laying out the text and format of the logo. So, this is essentially a two-in-one tutorial that can really boost your graphic design game.

3. How to Erase and Replace Any Image Background in GIMP 2.10

This tutorial, which has climbed from the #6 spot when it was first released to now the number 3 tutorial of the year, covers the popular topic of how to remove and replace a background for an image using GIMP. In the tutorial, I show you an easy but precise way to erase any background using a combination of tools (foreground select tool, paths tool, guassian blur, etc.). For this photo, I used a photo taken in a photography studio that had an uneven backdrop and replaced it with a solid color background.

After the GIMP team released its latest version – GIMP 2.10.10 – I released a tutorial covering all of the new features found in the release. It quickly became a favorite on our channel (though it is now second favorite for the entire year), pulling in nearly 20,000 views in less than a month, catapulting this video to the top of our list of most popular tutorials in 2019 when it first came out. From the smart colorization feature to performance updates, this latest version of GIMP comes packed with new features and performance improvements. Check out what’s new in GIMP 2.10.10!

Back at number 1 on our list (after falling to number 2 earlier in the year) of the Top GIMP Tutorials of 2019 is my tutorial covering the 10 Step Process for Editing Photo in GIMP. This process, which I devised myself, makes using all of the photo editing and photo adjustment tools consistently to get the best out of your photos time and time again super easy. If you’re looking for a fool-proof and replicable way to edit your photos each time you open GIMP, then this is the tutorial for you. I also provide reasoning as to why I use certain tools at each stage of the process and how those tools effect the overall image. There is good reason why this is our second most popular tutorial of the year to date!

That’s it for our Top 10 GIMP Tutorials of 2019! If you enjoyed this list, you can check out more GIMP Tutorials and How-to Articles on my Tutorials page, or visit my GIMP YouTube channel.