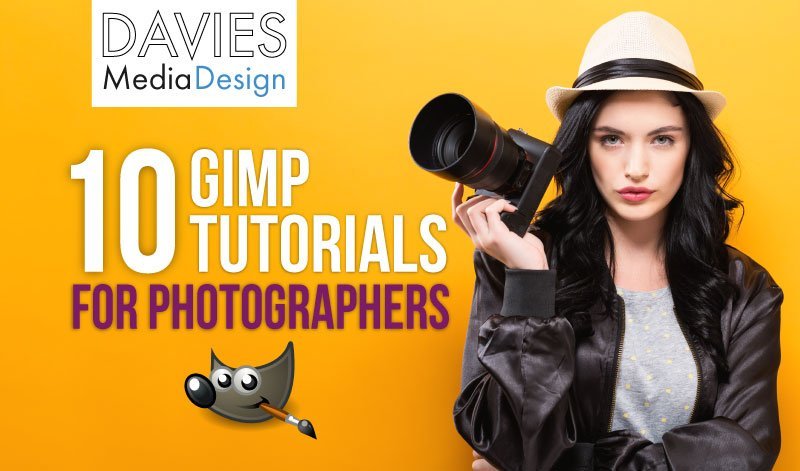 In 2018, the GIMP team released some serious updates to its free photo editing and photo manipulation software, making it a serious rival against its paid-subscription counterpart Photoshop. With improved performance and functionality, as well as a more user-friendly workspace, the GNU Image Manipulation Program (which works for Windows, MAC, and Linux operating systems) has now become a great option for photographers looking to enhance their photography for personal and professional projects.

That’s why we’ve put together this list of our Top 10 GIMP Photography Tutorials from the Davies Media Design YouTube channel – which is the largest active GIMP-dedicated YouTube channel on the planet. From how to open RAW images in GIMP to repairing old photos, these tutorials cover a variety of photo editing and manipulation techniques to help you fully utilize this amazing open source program.

It’s only appropriate to kick this list off with a direct comparison between 2 of the most popular photo editing programs out there. In this GIMP vs. Photoshop tutorial, I go over 10 features that are found in both programs – giving you a direct look at how similar these two programs really are despite one of them being free and the other requiring an annual paid subscription. From transform an image to straightening an image, changing hair color to blending multiple images, I show you many useful photo editing and manipulation techniques that can be accomplished with both programs (focusing more on GIMP).

Have an old photograph that is full of rips, wrinkles, specs, or any imperfections? These GIMP 2.10 tutorial shows you how to repair your old, severely-damaged photographs to make them look like-new!

Imperfections are both normal and common when photographing models or just photo subjects in general. In this GIMP 2.10 tutorial for photographers, I show you how to fix blemishes and general imperfections in skin complexion using a combination of the heal tool and airbrush tool.

7. How to Transform the Body in GIMP 2.10 (Warp Transform + Cage Transform)

Transforming the body is a common technique that was made famous by Photoshop (sometimes used to the extreme – making this technique infamous when overused). I show you how to perform some subtle transformations to improve the overall look of your image and model within GIMP 2.10 using both the Warp Transform and Cage Transform tools.

Erasing objects in your image is a very common task in the photo editing and manipulation world. Photoshop uses a feature called the Content Aware Fill to accomplish this task, whereas GIMP uses a plugin called Resynthesizer. In this tutorial, I show you how to download and use the Resynthesizer plugin, and also make a case for why this tool more easily and effectively removes objects from your image than the Content Aware Fill feature.

Have a photo that turned out too dark? Learn the proper way to brighten/lighten dark photos using the technique highlighted in this GIMP tutorial. I use a very dark portrait photo as my example. This technique is recommend by the official GIMP team and uses something referred to as a Contrast Mask to achieve the final result.

In our GIMP Photo Editing Tutorial: Create Soft & Dreamy Photos, I show you how to perform a popular technique used in wedding photography to make your photos have a light spill-over effect that creates bright, soft and dreamy final photos. This technique works best when you have a large single light source or several diffused, natural light sources throughout your image.

In this GIMP tutorial, I show you how to perform the popular “Double Exposure” effect which combines multiple image for a truly stunning final composition. This effect emulates exposing two photos taken on a traditional film camera, though this technique is much easier of course.

Want to learn the basics of editing a photo? This GIMP tutorial, which is our most-watched tutorial on our channel with over 400,000 views, goes over the beginner photo editing basics. I show you a variety of image adjustment techniques, including using the brightness-contrast, color balance, unsharp mask, levels, and more. This is a great place to start if you are a beginner photo editor or photographer.

One of our most popular tutorials of 2018 is our GIMP Tutorial: Top 5 Photo Enhancement Techniques. In this tutorial, I show you the 5 most popular techniques used to enhance an image in GIMP. I go over adjusting the color of your image, enhancing the eyes, whitening teeth, improving complexion, and brightening your subject.

Want to see more GIMP photo editing tutorials? Watch our entire GIMP Photo Editing Tutorials playlist on YouTube with over 50 video tutorials (and counting). Or you can enroll in our course GIMP Photo Editing: From Beginner to Pro Photo Retoucher on Udemy!