How to Open RAW Images in GIMP 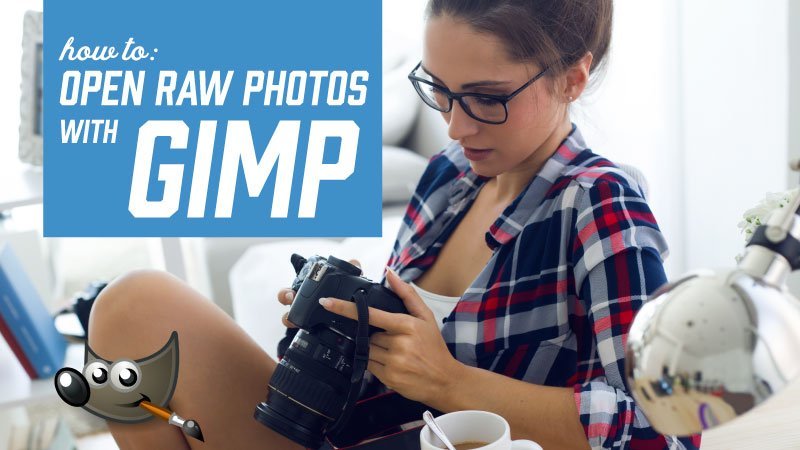 I have had a lot of viewers on my YouTube channel over the years ask me how to edit RAW images in GIMP. I am not going to mislead you by saying you can’t – because you actually can, just not technically. Sound confusing? The reason I say not technically is quite simple. Let me put it this way: you can edit RAW images in GIMP in the same capacity as you can edit RAW photos in Photoshop. The only difference is that as it stands currently, you don’t notice you aren’t editing your RAW photos in Photoshop because the process is so seamless. You are actually editing your RAW photos using Camera RAW, which automatically opens up when you tell your computer to open your RAW file using Photoshop.

GIMP uses the same method, but a different program, and the process isn’t as seamless as Photoshop’s at the moment (though they are working on it, with glimpses of this feature seen in the development version of GIMP 2.9). But do not fret! I am going to show you how easy it is to set up a RAW program that integrates with GIMP so that you can open RAW files into GIMP.

UPDATE: I created a video tutorial on How to Open RAW Images in GIMP 2.10 – watch it here. The information below still applies to GIMP 2.10 if you are using RAWTherapee.

The RAW program that I recommend for integration with GIMP is RAWTherapee. It’s actually a great program considering it is free, with tons of features that allow you to make adjustments to the photo (like in Photoshop). Plus, it’s simple to hook up to GIMP. There are other free RAW programs out there, but I haven’t had the same level of success with any of them that I have had with RAW Therapee right out of the box (speaking figuratively as it is a digital download).

It should be noted that the makers of GIMP mention UFRaw as the recommended app to use with GIMP, but this program has been inconsistent for me and their website looks like it was built in the same year the internet was created (and thus doesn’t seem very secure).

To download RAWTherapee’s latest version, visit the official RAWTherapee website here for the free download. Note: this software is always free, so do not download it from anywhere that is asking for you to pay for it. Also, always use a virus scanner when downloading executable files, especially if you do not download the software directly from the creators.

Once you download the program, open it up. The first thing you’ll want to do before editing your photo is change the preferences so that the photos will be opened in GIMP when you click “Edit current image in external editor.” To do this, click on the small “Preferences” button in the bottom left-hand corner (shown in the image above). 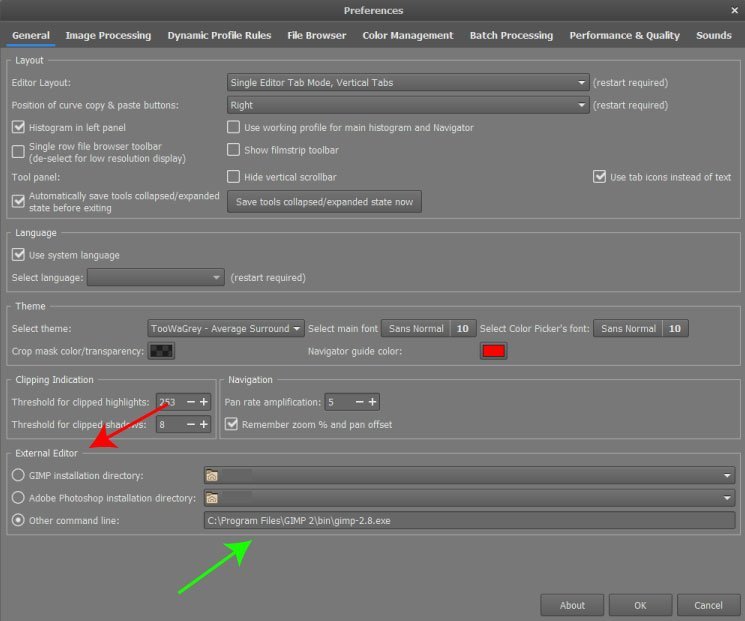 Under the “General” tab in the Preferences dialogue box, go down to the “External Editor” section (denoted by the red arrow in the photo above) and select “Other command line.” Here, you’ll copy and paste the file location of your GIMP installation, which is normally in your C drive under “Program Files,” “GIMP X,” where X is the version of GIMP you have installed (I have the newest version of 2.8), then in the “bin” folder. Copy and paste this location into the “Other command line” space, adding in the version of GIMP you are using (which is specified by the file’s name) to the end. Because I am using a version of GIMP 2.8, I added \gimp-2.8.exe to the end of my file destination (denoted by the green arrow in the photo above). Once you have added this, click “OK.”

Next, you’ll need to edit your image. You can find your image by going to the File Browser in the top left hand corner (shown in the image above), or by hitting Ctrl+F2 on your keyboard. This brings up several sections that help you search for your images, including a “Places” section with the various file locations on your computer, a “Recent Folders” dropdown section where you can select recent folders you have navigated to, and a “Folders” section where you can navigate the folders inside of the file location you selected in the above Places section. I have blocked out all of my folder names and destinations above for security purposes. You can double click on a folder to open all the images contained in that folder in the thumbnail preview area in the middle of the app. 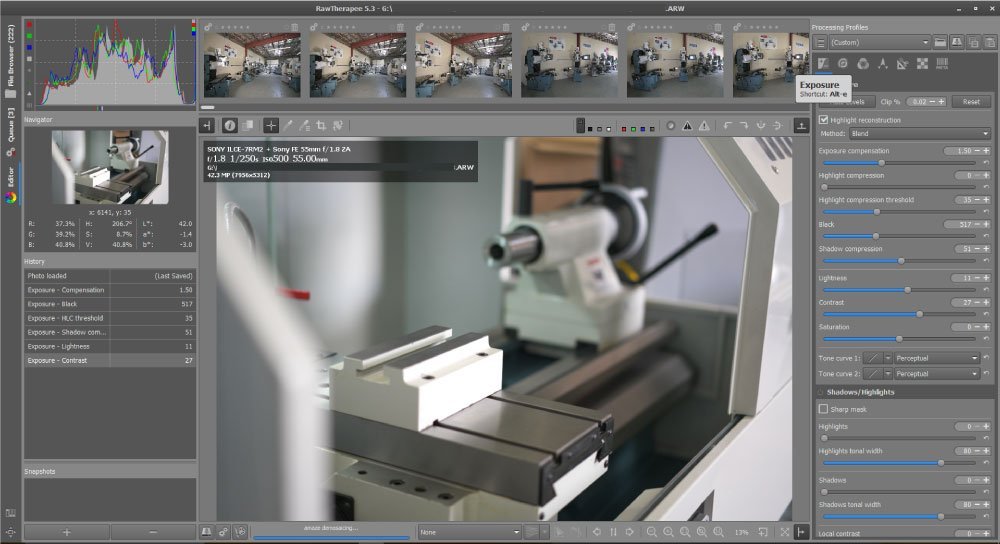 Once you locate the RAW image you want to edit, double click on the image. Wait for the image to load (you will see a small blue loading bar in the bottom far left of the app) and it will eventually open in the Editor (shown in the image above). Within the editor itself, you can edit the Exposure, Detail, Color, Wavelet, Transform, RAW, MetaData. How you ultimately edit your image is up to you and your style, as well as how the original image itself came out (i.e. its exposure, color profile, etc.). For detailed documentation on how to use all of the features in RAWTherapee, I recommend you check out their official documentation on RAWPedia.

Once you have finished making your adjustments, or are ready to bring the photo into GIMP, go down to the “Edit current image in external editor” button or press Ctrl+E (denoted by the red arrow in the image above). 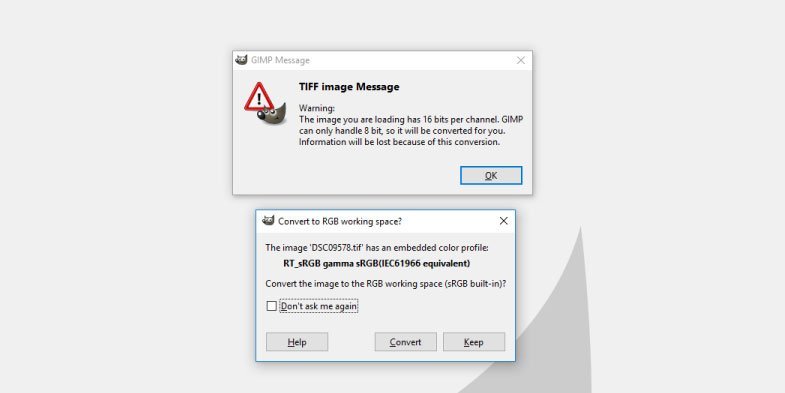 This should, if your GIMP file destination was properly defined in the step above, automatically open GIMP. RAWTherapee then sends your image in a .tif format to the program. You will see two dialogue boxes pop up from GIMP (shown in the photo above). The first will be the “TIFF Image Message” stating that the image has 16 bits per channel and GIMP can only handle 8. There is nothing you can do about this in version 2.8 and below, so just hit OK.

Note that in the current development version of GIMP 2.9 and in the upcoming 2.10 version you will be able to edit 16- and 32-bits per color channel.

The second box will ask if you want to convert the image’s color profile to the RGB working space native to GIMP (sRGB built-in). You can either keep the color profile that came over from RAWTherapee or convert it to GIMP’s native color profile. Either one will produce a sufficient image, so this choice is ultimately up to you. If you are worried about losing too much of the color from your adjustments, I would choose the “keep” option. 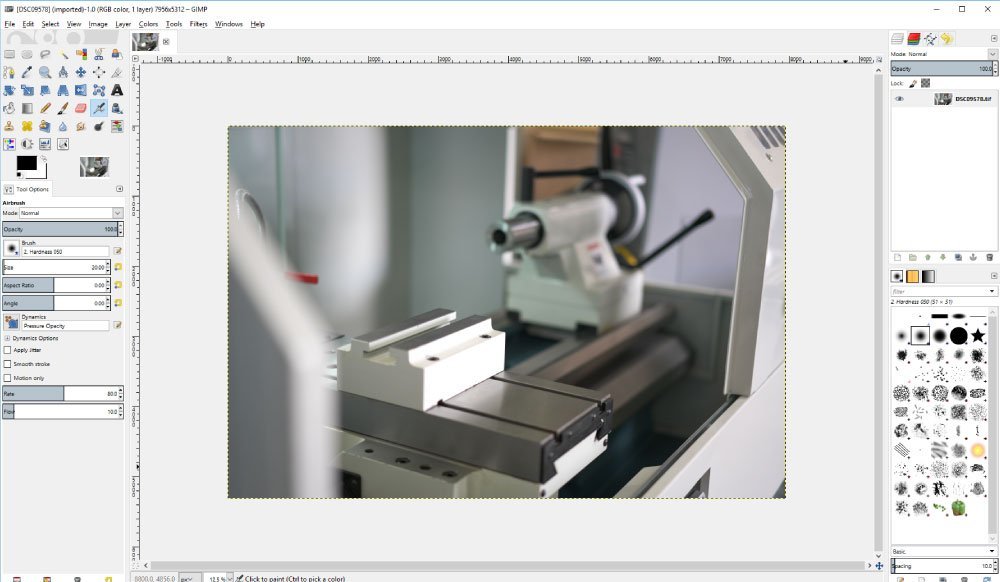 The image should now open in GIMP, and there you have it! You can now work on your image in GIMP.

The GIMP team is currently working on making RAW image editing more seamless, where, like in Photoshop, you will simply need to double click on a RAW image and it will open GIMP and the RAW editor within GIMP simultaneously. They claim to have this functionality in GIMP 2.9.6 (the development version), though when I tested it I received errors that the plugin couldn’t be located. Despite efforts to get it working properly, I couldn’t get it functioning, and so I wouldn’t currently recommend using the development version to open your RAW files. Once GIMP 2.10 comes out it should be a different story – and I will post an updated tutorial (GIMP 2.10 has now been released, and you can find the updated RAW tutorial here).

That’s it for this tutorial! Feel free to check out some other tutorials on our site, or check out our YouTube channel.