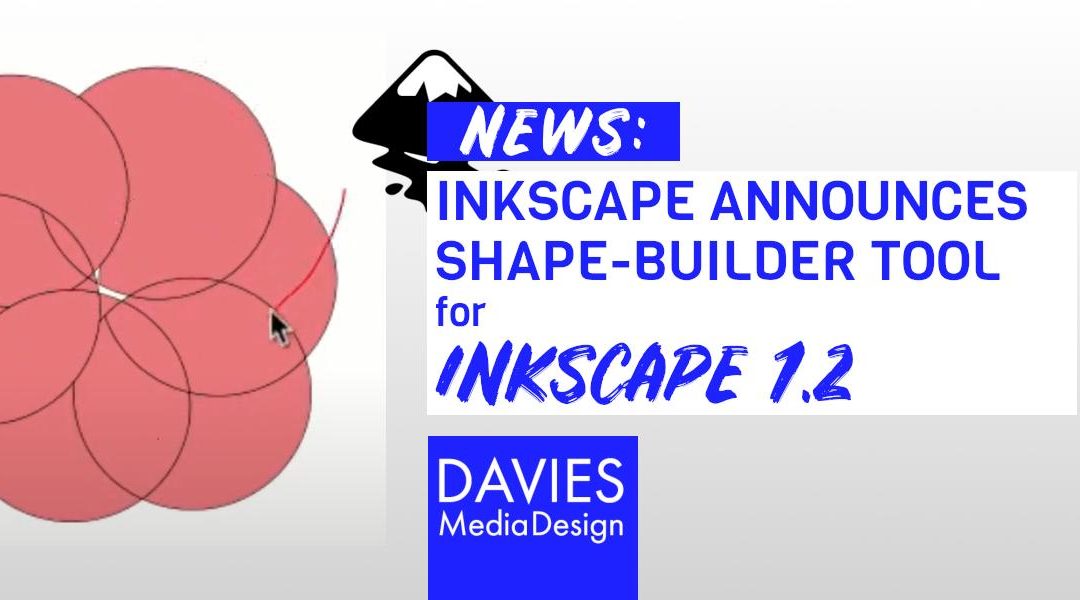 In a recent video originally posted to Martin Owens’s Patreon page, Mrs. Owens (a.k.a. Kama Lord) steps in for a napping and probably overworked Martin Owens (it’s his own fault for being so dedicated to Inkscape’s development) to announce that Inkscape is working on a new “on-canvas boolean editor” as a result of some coding done by Google Summer of Code student Osama Ahmad. Lord goes on to explain in the video that “to many users of other tools, this will be known as a shape editor or shape builder.”

Hold on while I pick my jaw up off the floor.

Inkscape introducing a shape-builder tool would create a seismic shift in the balance of power in the world of vector software. Currently, Adobe Illustrator is, as far as I know, the only program to offer any kind of on-canvas shape builder that merges or subtracts shapes and shape segments with the clicking and dragging of the mouse over said areas by the user. This feature to me has always been Illustrator’s bread-and-butter – it’s marquee tool that was exclusive to the program.

On the other hand, other programs, including Inkscape, have been able to implement a more simple “boolean operation” for shape interaction between selected shapes, though this feature isn’t nearly as intuitive or useful as an on-canvas shape builder.

Lord goes on to further explain the functionality of this tool: “It will allow you to build a set of simpler, overlapping shapes, and take the overlaps and merge and/or remove different parts into a final composite shape.” As she speaks, the video shows a user dragging a mouse, which is trailed by a red line, across multiple overlapping shape segments, then releasing the mouse to show those segments being merged into a single segment (and leaving the surrounding segments unaffected).

This groundbreaking new feature is set to be released with Inkscape 1.2, which, according to the video, we probably won’t see for another 300 days from now (i.e. Spring 2022).

This breakthrough is only one of several announced in the same Patreon video. Also announced is an exciting improvement to Inkscape’s Gradient Editor based on a collaboration between contributing developers Mike Kowalski and Adam Belis. The video showcases new gradient stops like the ones used in GIMP, though the ones demo’d in the video appear to be more user-friendly. The new editor will provide the user with many more gradient customization options than are currently available, a much needed improvement to Inkscape if you ask me.

Finally, there were two huge upcoming alignment upgrades announced for Inkscape. The first was contributed by intern Kavya Jaiswal and includes alignment handles that will display, when enabled, around selected objects or object groups (similar to the already-implemented transform handles). This will make it easier to align and distribute objects or object groups on your canvas in real-time, which is another user-experience upgrade.

The second alignment feature coming to Inkscape was contributed by another Google Summer of Code student, Parth Pant, and is essentially Inkscape’s version of the popular “Smart Guides” feature found in premium software like Adobe Illustrator and Affinity Designer. Lord refers to this feature as “on-canvas alignment snapping” in the video as it is a utilization or evolution of Inkscape’s pre-existing snapping capabilities. Regardless of the nomenclature used to describe the new feature, what it’ll do is display live guides when the snapping feature is enabled to allow users to quickly align objects on the canvas in real-time to one another or to certain points of interest around the canvas. This will save a ton of time while drastically improving Inkscape’s functionality. (I have seen a lot of people asking when such a feature would be implemented in Inkscape).

In closing, while it’s great to see major Inkscape contributor Martin Owens finally getting some shut eye, I hope he doesn’t over sleep as I’m really looking forward to these new features!