How to Create Curved Text in Inkscape 1.0 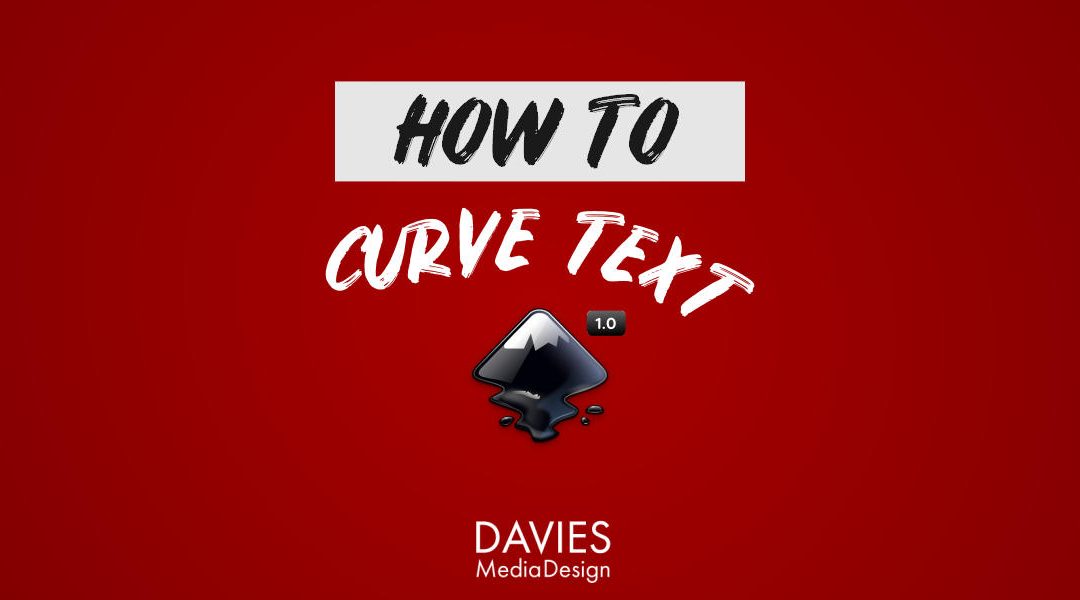 In this article I’ll be showing you how to easily create curved text in Inkscape. This method is quick and easy – only requiring the right sequence of steps to get the result you want. If you are a beginner, you should find this easy to follow! Note that there is a video version of this tutorial below, or you can scroll past it for the Help Article version.

Also note that I will not be covering how to add text around a circle shape in Inkscape as I have discussed that topic in another article.

I’ll be using Inkscape 1.0 to demonstrate this tutorial, which you can download for free for any operating system via the Inkscape website. Let’s get into it!

I’ll start by grabbing the text tool from the Toolbox (red arrow in the photo above – you can also use the shortcut key “T”).

Once you have the text tool selected, click on your canvas and type whatever text you’ll be curving. In my case, I just went with “CURVED TEXT” in all caps. Once you have typed out your text, you can use the Tool Options bar to change the font (red arrow in the photo above) and size (green arrow) of your text. I went with Century Gothic for the font, and 72 pt for the font size.

Go about halfway across your canvas (red arrow in the photo above – or whatever total distance you want your curve to be) and click and drag to create a second node with a curve (you’ll see blue handles pop out on either side of the second node – denoted by the green arrow in the photo). Release your mouse when you have the curve you want.

Then, click and drag a third node on the far right side of the canvas (red arrow in the image above – or wherever you want your curve to end) – the line will already be curved from the second node you created, but you can also click and drag when you create this node to further curve it. Release your mouse when you have the curve you want.

Grab the select tool from the Toolbox (shortcut key “S”) to select the curve.

Then, hold the shift key on your keyboard and click on your text to select both the curve and text simultaneously (red arrows in the image above).

Finally, go to Text>Put on Path. This will draw your text across the curved path.

If you want to change the curvature of the path to adjust how the text look, you can always grab the “Edit paths by nodes” tool (red arrow in the image above – shortcut key “n” on the keyboard) and click on any of the nodes you created when you drew the curve.

If you gave a node handles when you created it (when you clicked and drag to create a curve), those handles will reappear when you click on that node and will allow you to adjust the curve of the line (red arrow).

Once the curve of the text is how you want it, grab the select tool from your toolbox and select the text. Then, go to Path>Object to Path (red arrow in the image above). This will convert your text to a path and separate it from the curved line. You can now reposition the text to wherever you want without it being effected by the curved path.

You now have curved text! That’s it for this tutorial – hopefully you liked it. If you did, you can check out my other Inkscape Help Articles and Video Tutorials, or your can view my other tutorials and courses on GIMP and Darktable. You can also get more with a Premium Membership to Davies Media Design.