Is Your GIMP Toolbox Missing? Here’s How to Get It Back 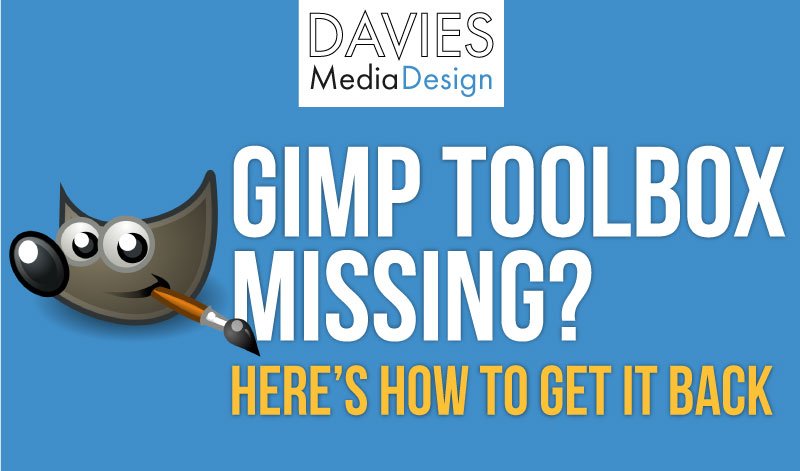 It is a common problem for GIMP users to open up their GIMP and realize they have no toolbox on the left side of their GIMP program window. Fret not – this issue is simple to fix, and I will show you how to fix the issue in this short how-to article. You can also view the video below if you prefer, or scroll past the video to read this article – which is available in 30+ languages via the language dropdown in the upper left corner.

First, it helps to understand GIMP’s layout, including the differences between the layouts of older and newer versions of GIMP.

Older versions of GIMP used to open, by default, in “Multi-Window Mode” – meaning that all of the dockable dialogues, such as your Toolbox, Canvas, and Layers Panel, were open in separate windows (shown in the image above) when running GIMP.

However, as users became frustrated with the Multi-Window Mode layout, especially those users who switched from Photoshop (which uses a single window), the GIMP team decided to switch the default layout of the GIMP workspace to Single Window Mode (shown in the image above). This puts all of the GIMP dialogues in a single place, making it easy to manage the various dockable dialogues and also keep track of multiple images opened in GIMP.

On the other hand, in Single Window Mode, having two or more images open in GIMP simply means you’ll have multiple tabs that you can click on to get to the various image canvases open simultaneously in GIMP (as shown in the photo above – this example shows 3 images open in GIMP, which are organized by tabs rather than multiple canvas windows).

So what does all this have to do with the Toolbox?

Well, when you are in Multi-Window Mode, each dialogue window you have open (i.e. the Toolbox) has an “x” icon in the top right corner (denoted by the red arrow in the image above), allowing you to close out the Toolbox window (the same way your internet browser has the “x” icon in the corner that allows you to close the browser window). It is fairly common that a user will accidentally click this “x” icon and close out the Toolbox window when trying to close GIMP (or perform some other action), causing the Toolbox to disappear.

This does not happen in Single Window Mode as there is no “x” icon in the corner of the toolbox that would allow you to close the window.

Regardless, if you find your GIMP Toolbox is missing, you can open it back up by going to Windows>Recently Closed Docks>Toolbox – Tool Options, Devices, Images (as shown in the image above). No matter what window mode your GIMP is in, the Toolbox will then open up as a separate Window. In the image above, I am in Multi-Window Mode.

In this image (above), you can see that the Toolbox opened in a separate window (after going to Windows>Recently Closed Docks>Toolbox – Tool Options, Devices, Images to reopen it) despite being in Single Window Mode.

If you are missing more than just your Toolbox – for example every window is missing beside the Canvas Window – you may have accidentally hit the “tab” key on your keyboard, which is a shortcut to hide all windows besides the Canvas Window. You can see if this is the issue you are having by going back to the Windows menu and seeing if the “Hide Docks” option has a check mark next to it (you can also see that “tab” is listed as the shortcut key for this feature).

Join our mailing list to receive the latest tutorials, news, and course updates for all your favorite open source software!

Simply hit the tab key again on your keyboard to bring all of the docks back (if this is the issue), or click on the Windows>Hide Docks menu item so that there is no longer a checkmark next to it.

If you are missing any other docks, you can always go to the Windows menu and find the dock you are missing either under “Recently Closed Docs” or under the “Dockable Dialogues” menu. You can also open additional dialogues from these menus that will allow you to access other features within GIMP (which I won’t go into for this tutorial).

That’s it for this tutorial! If you liked it, check out more GIMP how-to articles or GIMP video tutorials on our website and GIMP YouTube channel.