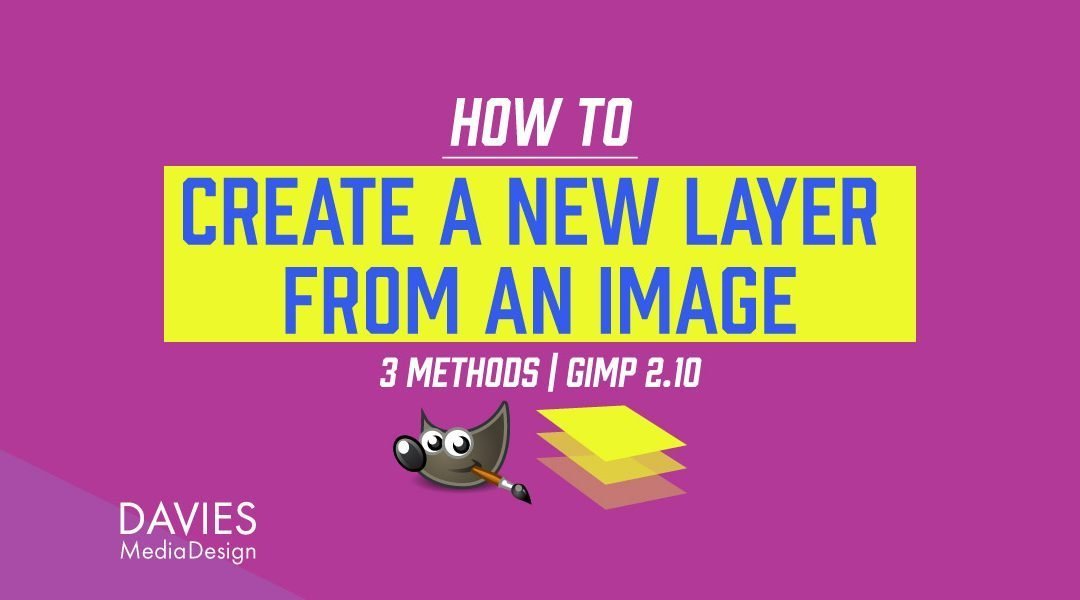 In the first and second GIMP layers tutorials that I created for this series, I have been working with layers that are filled in or have been painted on with a single color. Working with GIMP can obviously be a lot more complex than this as you can use multiple colors on a layer, combined with multiple tools and layer modes, and can also create new layers using imported images.

Importing an image as a layer is a very simple process that can be done using a few different methods. I will be covering these methods in this GIMP Help article. You will notice in this article that I already have a background layer and Layer 1, which has a blue squiggly line on it. If you are wondering how I got here, feel free to check out Part 1 or Part 2 of this series (this is technically Part 3, though it can be read as a standalone article without the other 2) on GIMP Layers. 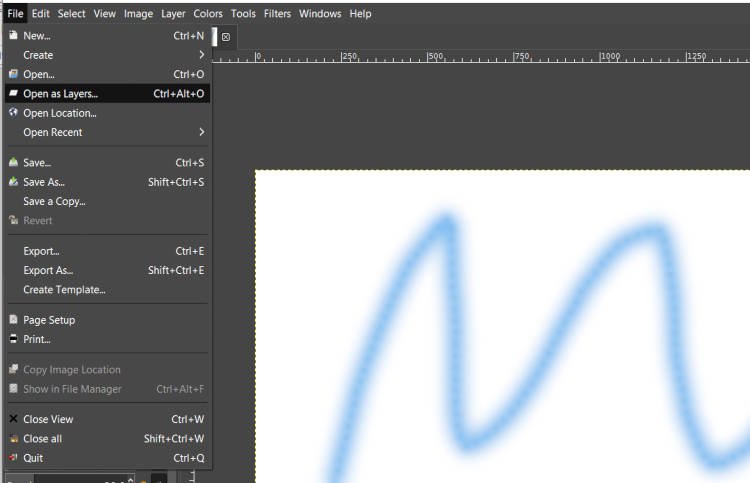 The first method is to go to File>Open as Layers. This will open the “Open as Image as Layers” dialogue box. 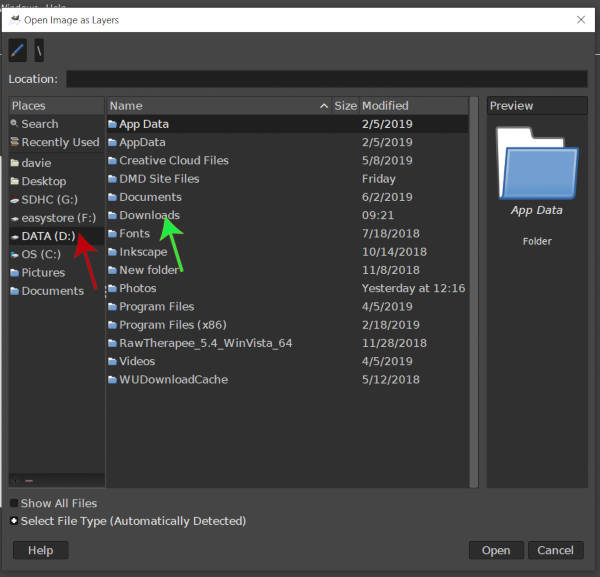 From there, you can browse your computer’s files in the Open as Layers dialogue box (pictured above) to find an image that you want to use to open as a layer. 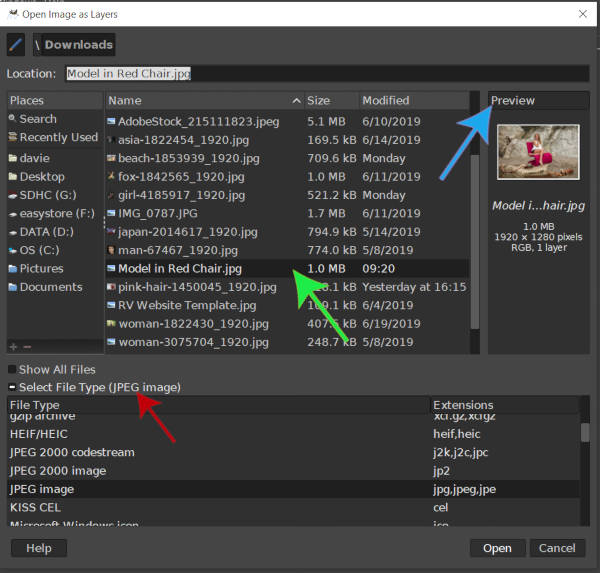 If I have a lot of files and different file types in my folder, I can click on the dropdown option “Select File Type” (denoted by the red arrow) to narrow down the files to only a certain file type. For example, I know the image I am looking for is a JPEG, so I can select the “JPEG Image” option to ensure that only JPEG files are shown in the folder I am searching in (this feature is only available in GIMP 2.10 or newer).

I can now scroll through the JPEG images until I find the image I want to use. In this case, I will use the “Model in Red Chair” image (green arrow). When I click on the image, a preview of the image will show up in the Preview section (blue arrow) – which also displays the image file size, dimensions, color space, and number of layers contained in the image (JPEG images will always be 1 layer).

Once ready to open the image, I will click the “Open” button. 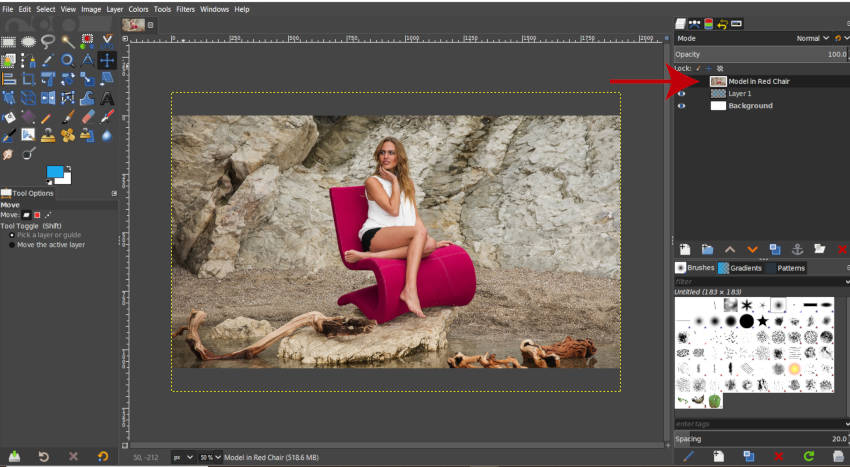 This will open my image as a new layer in my composition. GIMP will open your image one step above your active image in the layer stack. So, because my active layer was Layer 1, which was the topmost layer in the stack, my new image layer has opened up as the new topmost layer in the stack (red arrow). Additionally, because my image is 1920 x 1280 pixels, it is larger than the size of our overall composition (which is 1920 x 1080), and thus it obstructs all of the pixels in the layers below it. The only thing you can see right now is the image. Additionally, the layer boundary of the image goes outside the canvas boundary, as denoted by the yellow lines that outline the layer. 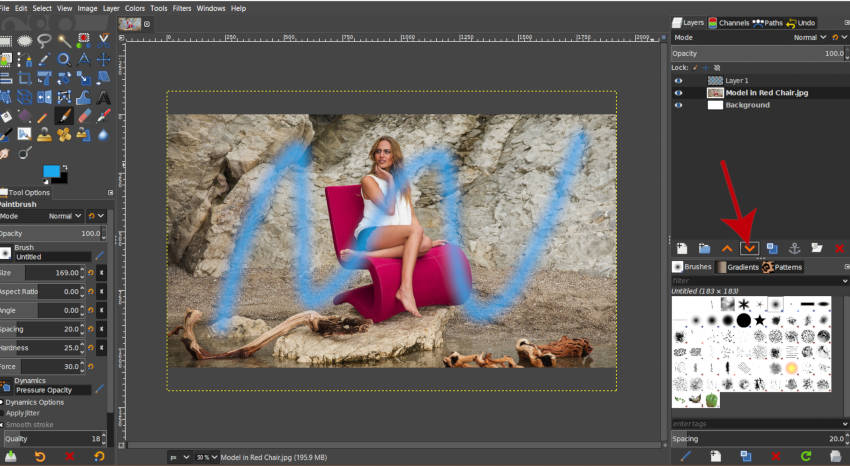 If I click on the “Lower” layer icon (denoted by the red arrow), I can lower the image in the stacking order, which will reveal the blue pixels painted on Layer 1. 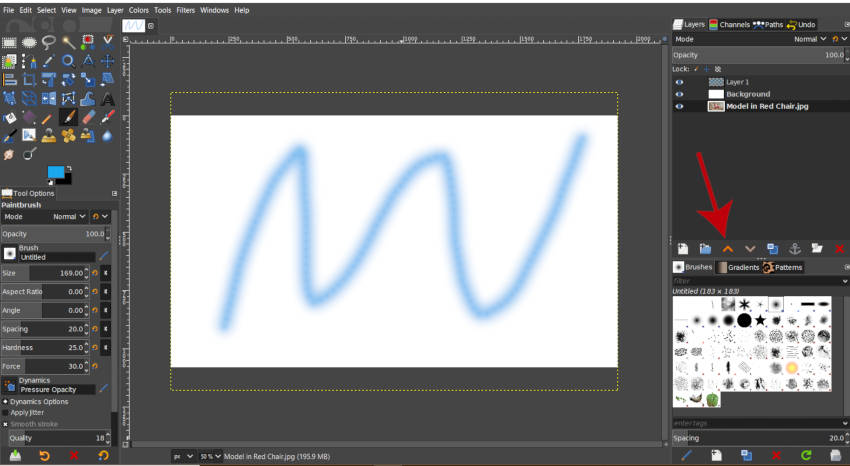 If I click the “Lower” layer icon one more time, the white pixels from our Background layer will now totally obstruct the image. Additionally, the option to lower the layer has become grayed out as it is now the lowest layer in the stacking order. However, I can now use the “Raise” layer icon (red arrow) to raise the layer in the layer stack. 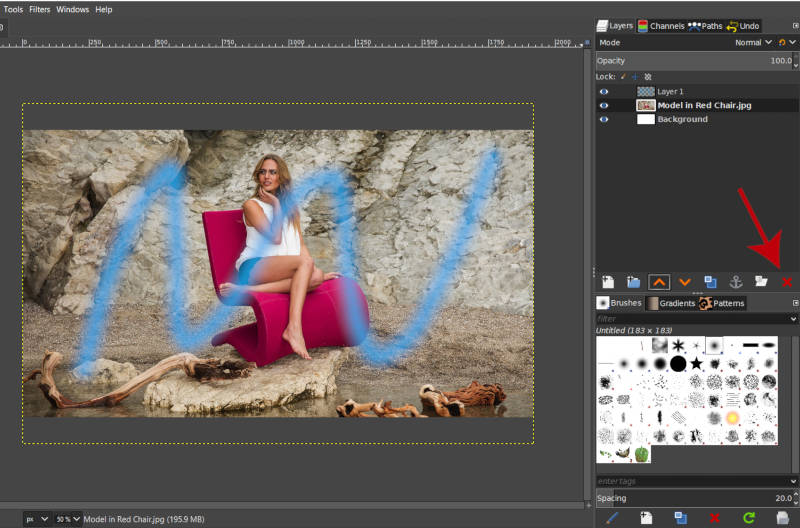 However, at this point I will click the “Delete this layer” icon (denoted by the red arrow in the photo above) to delete the image layer. I mentioned earlier in this article that there are multiple methods for opening an image as layers into your composition. I will now explain the second method. 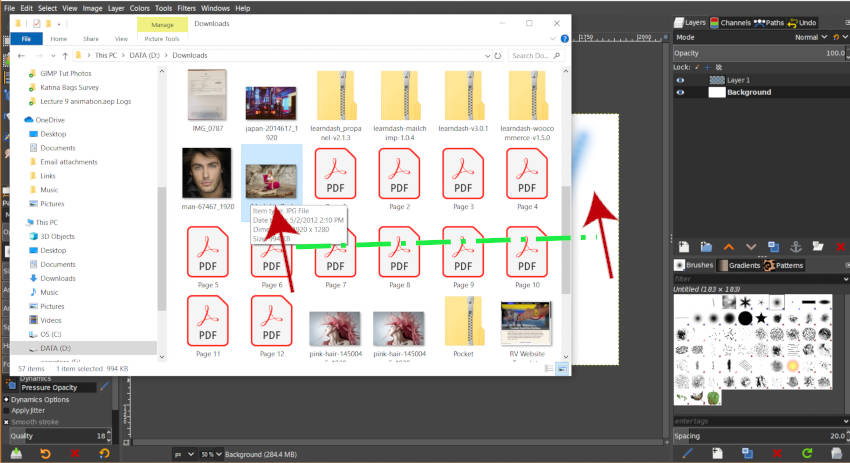 The second method is to simply use the File Explorer (or Finder Window on a MAC) to locate the image you want to use. In my case, I will go to the Downloads folder on my Data (D:) drive.

Once I have found my image in my folder, I can click and drag the image (first red arrow on the left) from the File Folder directly into my composition in GIMP (to the second right red arrow in the photo above). You can simply drag your image over any part of your canvas, then release your mouse once you are hovered over the canvas. 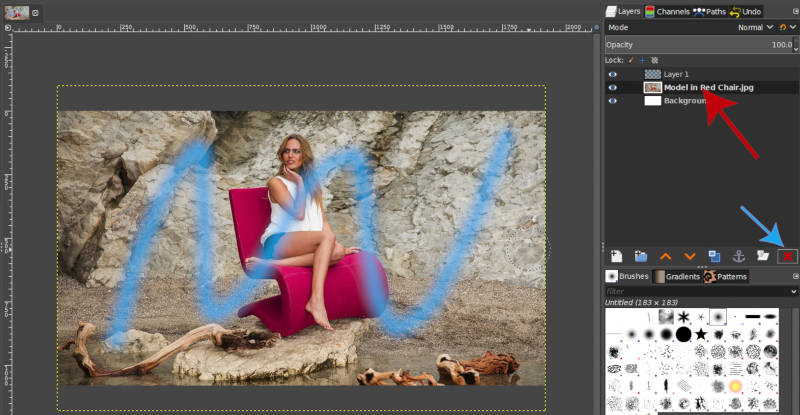 This will open your image once again as a layer in your composition. The image layer’s position in the layer stack will once again depend on which layer was your active layer at the time you dragged and dropped your image into the composition. In my case, since my Background layer was the active layer, my image layer shows up as second in the layer stack (just above the Background layer and below the Layer 1 layer – denoted by the red arrow).

I will now click the “Delete this Layer” icon (blue arrow) again to delete the model photo layer and get ready for the third and final method.

Method 3: Drag and Drop from Another Composition in GIMP

The third and final method for opening an image as a layer in GIMP involves a scenario where you already have an image open in GIMP in another tab. 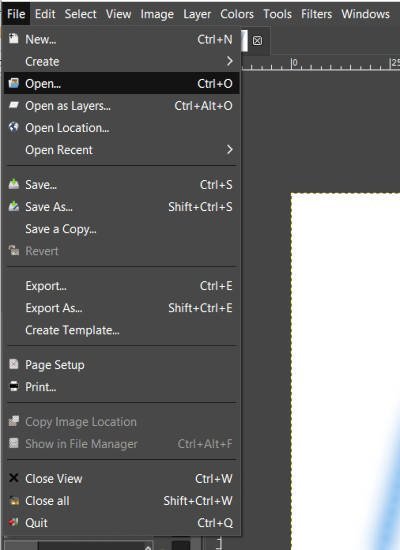 For example, I can open an image in another tab by going to File>Open. 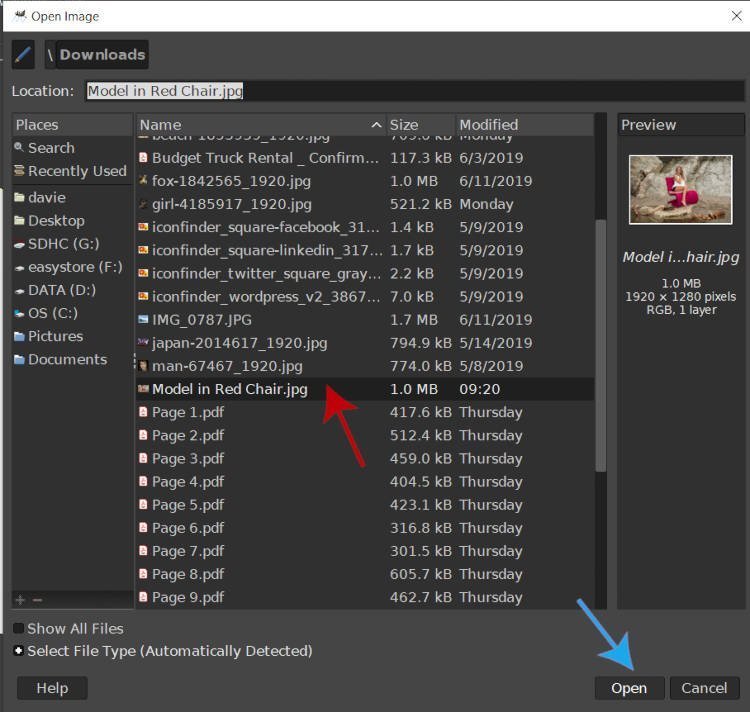 This will bring up my Open Image dialogue box. From here, I can once again open up the image I want to use – which is the Model in Red Chair image (red arrow). Click the Open button (blue arrow) to open the image into GIMP. 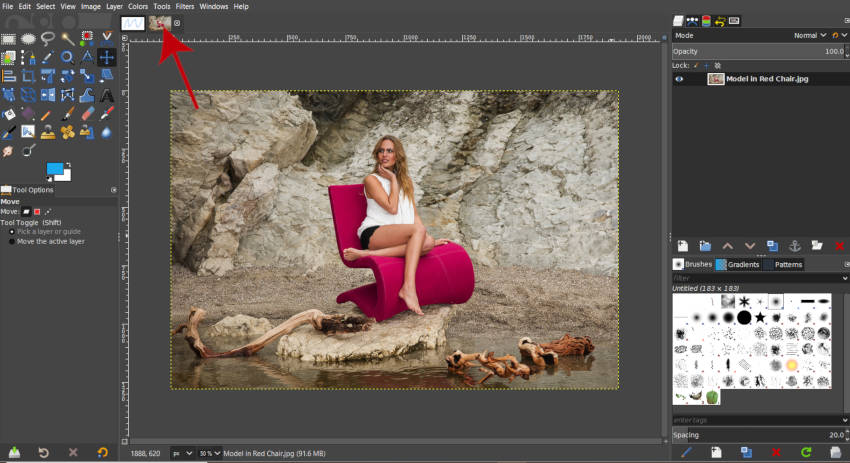 This time, when I click the “Open” button, it will open my image in a brand new composition – which is in a separate tab from the composition we’ve been working in (the new tab is denoted by the red arrow in the photo). The composition only has a single layer, which has the same name as our original image (“Model in Red Chair.jpg”). 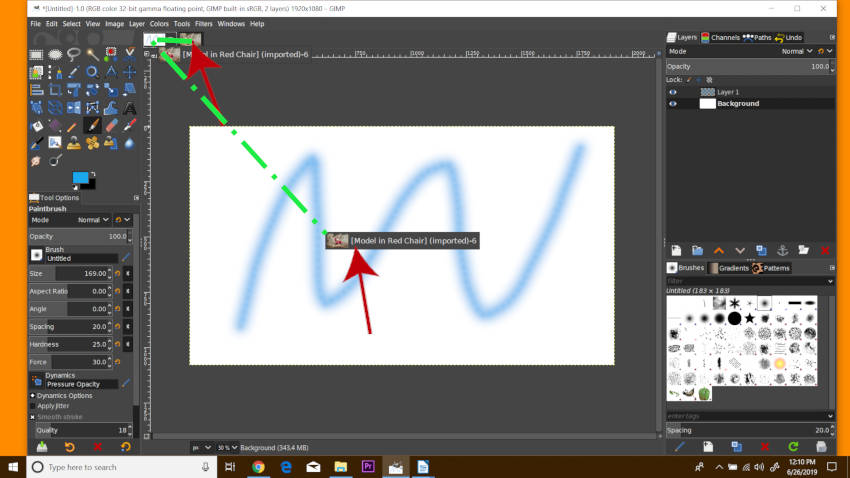 To bring this image into my other composition, all I need to do is click on the tab at the top of the image window, drag my mouse over the tab of the composition where I want to place my image (so, the tab for our original composition), drag my mouse over the canvas, and release my mouse. (Follow the path of the green line in the image above, clicking where the first red arrow is to start and ending where the second red arrow is over the canvas). 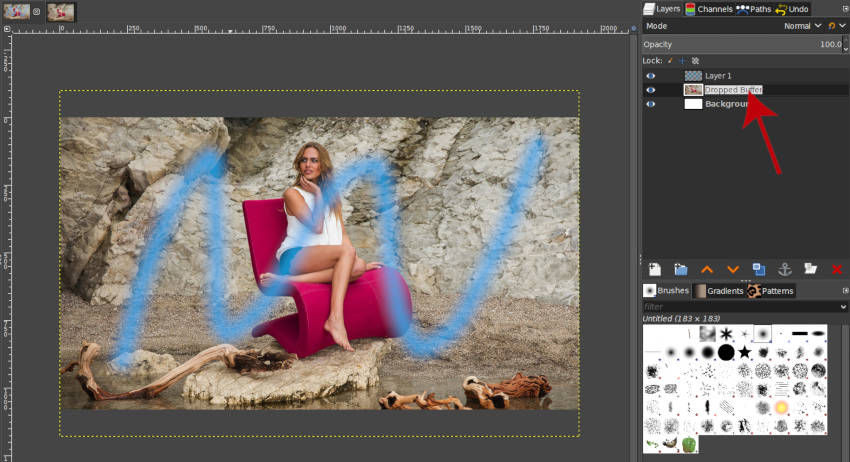 My image has now been added as a new layer to my original composition – this time with the layer name “Dropped Buffer” (denoted by the red arrow).

I can double click on the layer name to change it to whatever I want – in this case I’ll just change it to “Model in Red Chair.” Press the enter key to apply the new name.

That’s it for this tutorial! Up next in my GIMP Layers series, I’ll dive into Layer Transparency. If you liked this tutorial, you can check out any of my other GIMP Help Articles, my GIMP Video Tutorials, or my GIMP Premium Classes & Courses.