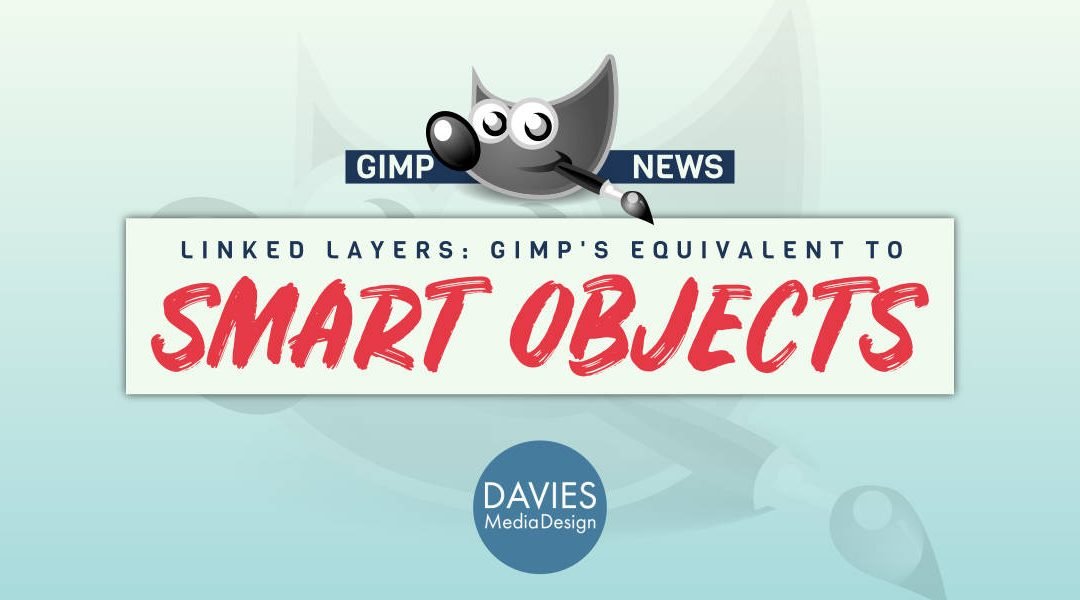 The GIMP team recently informed me that the next upcoming version of GIMP will be GIMP 2.10.22 (no GIMP 3.0 just yet – womp). Though there has been no official announcements of specific features to come in this next version, there has been one feature announcement in particular that has caught my eye – the “linked layers” feature.

GIMP quietly announced (via a retweet) that the ZeMarmot team was working on a new feature they are calling the “Linked Layers” feature (note: this has nothing to do with the “transform link” feature already found in GIMP).

In fact, work for this feature actually began in July 2019 (about a year ago) but, due to limited developers working on GIMP, this feature was shelved until recently.

Jehan from ZeMarmot, who recently revisited development on this feature, described the application of Linked Layers in this way: “What if you wanted to use the same background in several images? Instead of duplicating it, you could just link it from all images using it. And if you edit a bit your common background, it would automatically update the render of all images.”

To me, this sounds like GIMP’s version of “Smart Objects” – the popular Photoshop feature that allows you to “link” a different file to your composition, then have that file live update in your current composition any time you make changes to it. This has many applications – especially in the world of creating universal templates that can be updated with your own design (by simply replacing the “linked image” with your own design, then re-saving that image). This is huge.

It would work like this in GIMP: you would create a new layer, and under “Fill With” you choose “Image Link” (red arrow in the image above). Choosing this option would bring up an option to select an image to link the layer to on your computer (blue arrow). You then select your image, and click “OK” to create your new layer. The layer is now linked to the image on your computer. If you were to then open that image in GIMP and make edits to it, the edits would automatically update in the linked layer inside your other composition.

Some of you are wondering how this feature would keep pace with Photoshop’s well-established “Smart Objects” feature. In Photoshop, not only can you link a layer from one composition to a layer or image from another composition, but you can also link vector objects from Adobe Illustrator as a layer in Photoshop, and edit that vector object essentially in real-time in either program and have the quality of the vector object remain intact.

Well, GIMP’s “linked layers” will do the exact same thing – using Open Source alternatives, of course. This feature will be integrated with Inkscape so that, for example, you can link a vector composition to a GIMP layer, and have the GIMP layer scale up without quality loss the way any vector object would in Inskcape. This is mind-blowing. You could also make updates to the vector file in Inkscape, and those changes would then refresh inside of the linked layer in GIMP. It would essentially create a dynamic link between the two programs.

Here is a video ZeMarmot released showing this new “linked layers” feature in action. This isn’t just a pipe-dream or concept yet to be implemented – it’s a feature they’ve demonstrated to work in a test-version of GIMP.

If GIMP can successfully get linked layers to work in a stable release version of GIMP, the internet, myself included, will lose its mind. And, once again, GIMP will have successfully taken a bite out of Adobe’s photo editing software lead (still without charging its users a dime).

In my opinion, some form of “smart object” functionality is one of the top 3 features missing in GIMP (and one of the top 3 things I get comments about on my videos – especially when doing PS vs. GIMP comparisons). Stay tuned – I will provide more information on this feature as it comes out (hopefully via a video tutorial if they get the feature implemented in one of the new release-versions of GIMP).

If you want to help speed up the development of this and other cool new features in GIMP, I recommend supporting the ZeMarmot team on Patreon so they can spend more time on GIMP development and less time on other jobs to pay their bills.