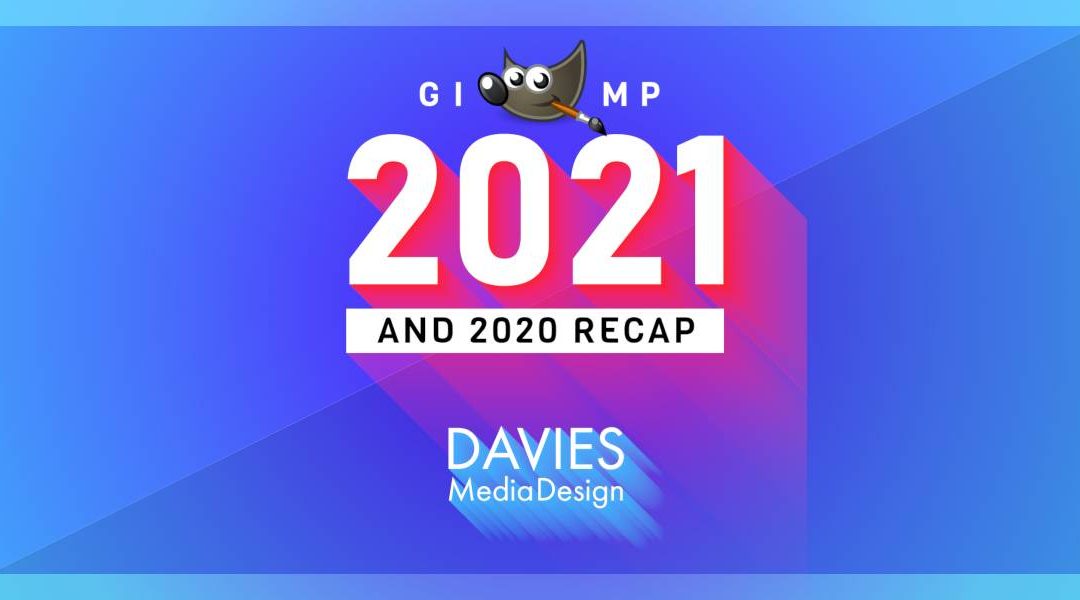 2020 – the year we won’t forget. The year we… can’t forget. No matter how hard we try. It’s the year that’ll linger long into 2021 – like that Adobe Creative Cloud subscription payment that keeps showing up in your bank statement.

However, as horrible as the year was, there was still some good to come from it – including some great work from the GIMP community.

GIMP 2.10.18 saw important UI improvements made to the GIMP Toolbox – including the re-ordering of tools based on how commonly they are used, introduction of tool groups for organizing tools into similar categories, and the option for a single-column toolbox layout for a less-cluttered GIMP window. This release also rolled out the brand-new 3D Transform Tool, better performance when transforming larger images, new tool slider styling and key modifiers, and improved brush performance.

The subsequent release, GIMP 2.10.20, introduced some great new features including non-destructive cropping, additional improvements made to the grouped tools feature – including more intuitive mouse behavior when hovering over a tool group, and on-screen editing for the Vignette filter – allowing users to tweak various aspects of a vignette directly on the image window. This version debuted new blur filters like the lens, focus, and variable blur filters – all of which are GEGL filters and therefor have live on-canvas previewing, and the new Bloom filter for easily creating that “soft, dreamy” look in images – among other uses. Lastly, GIMP 2.10.20 came with performance improvements made to GEGL filter previews, and the new ability to easily and precisely stroke text via the “Drop Shadow” filter.

Finally, GIMP 2.10.22, which is known as the “File Formats Release,” came with plenty of great features – though most of them are more technical in nature. In this new version, you’ll find new support for HEIF files – HEIF standing for High Efficiency Image File Format, AVIF files (which can support HDR functionality), and PSP files – which is Paintshop Pro’s native file format. The “file formats release” also improved multi-layer TIFF file support, introduced “sample merged” for GEGL filters that use the color picker tool – which allows you to pick colors from all visible layers in the composition and not just the active layer, and a major bug fix for the popular Foreground Select Tool.

MAC users were stuck on GIMP 2.10.14 for pretty much all of 2020 due to a lack of MAC development support throughout the year. However, the GIMP team did finally release a MAC installer for GIMP 2.10.22 on December 24th, bringing the new features I just mentioned to macOS for the first time all year.

The GIMP community also made progress towards GIMP 3.0 with two development release versions hitting the Development Downloads page in 2020 – including GIMP 2.99.2 and 2.99.4. I highlighted the new features found in GIMP 2.99.2 in my “GIMP 3.0 First Look” live stream video. Some of these features include a brand-new user interface, new “hot-plug” device support for instant recognition of peripheral devices like drawing tablets, multi-layer selection – a long awaited and much needed feature for the Layers panel, and the framework for the exciting new Extensions Management feature.

GIMP 2.99.4, the most recent unstable development version at the time of this video, rolled out with some more bug fixes and API updates. For example, corrections were made to some conflicting actions that occurred when using key modifiers to select multiple layers. But, by far the most exciting new  feature announced in GIMP 2.99.4 is the brand-new Paint Select Tool – a game-changing smart-selection feature not unlike Affinity Photo’s Selection Brush Tool or Photoshop’s Quick Selection Tool.

This new Paint Select tool (pictured above), though still in its beginning stages of development, will make it easy to select objects in photos by simply painting them with a traditional brush head. Of course, instead of painting a color you’re painting a selection. This tool should help significantly beef up GIMP’s offering of smart selection features, thus keeping the free software competitive with premium offerings.

Now it’s time to make my predictions for GIMP in 2021, mostly so all of us can go back and read this article in a year and marvel at how wrong I was once again.

I’ll start by noting that in last year’s video previewing GIMP for 2020 I predicted GIMP 3.0 would be released between September and November of 2020, and the year before that I expressed hopes of GIMP 3.0 being released “sometime in 2019.”

A major GIMP contributor noted on one of GIMP’s issue boards that “GIMP 3.0 is not set to be released soon (not even sure in 2021),” and also noted that many developers took a “2020 apocalypse pause” from contributing to the GIMP project.

Taking a quick look at the graph of developer commits over the past 5 years (above), you can see 2020 had a steady level of commits throughout the year, though its highpoint of total developer commits was lower than all the highpoints in the previous 4 years. In years past GIMP benefitted from occasional boosts in productivity, whereas 2020’s productivity mostly flatlined.

And to be fair, productivity around the world flatlined thanks to the pandemic, so I don’t fault GIMP developers for losing motivation this year.

With this in mind, I predict GIMP 3.0 won’t see the light of day until 2022 at the earliest barring a major uptick in developer commits and developer funding. But while we wait for GIMP 3.0 we should continue to see new GIMP 2.10.x versions and GIMP 2.99.x development release versions. I will add that if the pandemic gets under control and life returns to some semblance of normalcy, we could very well see the uptick in productivity the GIMP project needs to tackle some of the major GIMP 3.0 roadblocks and get this version out sooner than anticipated.

Remember – it took 8 years to go from GIMP 2.8 to GIMP 2.10. If GIMP 3.0 came out in Spring 2022, that would be a 4 year gap between major releases, or half the amount of time between previous major releases. If this did indeed end up being the timeline for GIMP 3.0, it would mean we could realistically expect GIMP 3.2 sometime around Spring 2024.

Some additional features in the works that aren’t currently tied to any particular GIMP version include improved animation features, script recording and playback – which I assume would be the equivalent to Photoshop Actions or Affinity Photo Macros, Smart Objects – which are called “Linked Layers” in GIMP, High-end CMYK support, Improved text features for the currently-finicky text box, a shape tool, and vector layers.

I honestly don’t know what version any of these features will show up in, though it does appear that some of these features are further along in development than others. For example, I’ve seen screenshots of a test version of Linked Layers – GIMP’s version of Smart Objects – from the ZeMarmot Team – which you can learn more about in my article on the subject. On the other hand, improved Animation Features and High-end CMYK support are both listed with statuses of “Work in Progress” on the GIMP Wiki page – meaning work has begun on these features, though I’m not entirely sure how far along these project currently are.

There is a possibility we could see one or more of any of the new features I discussed in this article in a GIMP 2.10.x release version, though it’s more likely that most these features won’t be around till at least GIMP 3.0. There also doesn’t appear to be any change in the timeline for the introduction of filter and adjustment layers, so we can still anticipate these showing up in GIMP 3.2.

Finally, moving on to the growth of my channel over the past year, Davies Media Design saw over 4 million new views on its videos and over 40,000 new subscribers to the channel. I can’t thank all of you enough for the support you’ve provided me and my channel over the last several years, and hope you’ll continue watching the tutorials on my channel – including new tutorials coming out in 2021!

That’s it for this tutorial! If you liked it, check out my other GIMP tutorials, or become a DMD Premium Member for additional access to content and resources.