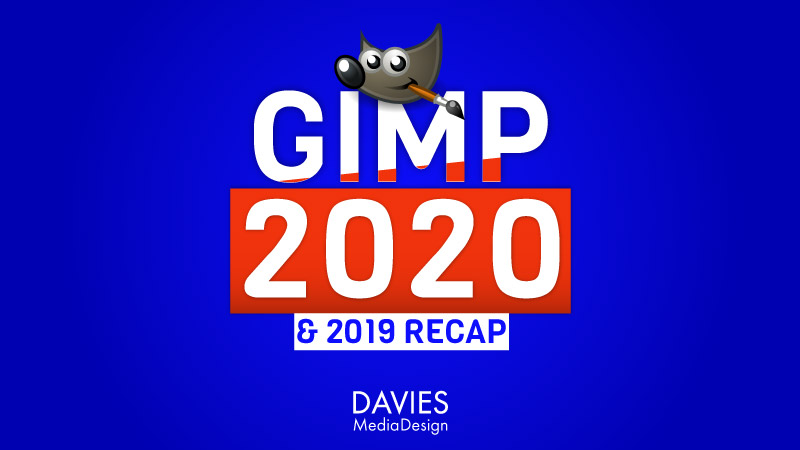 Welcome to the new decade! 2020 brings a new year, and hopefully with that comes more progress with the GIMP free photo editor! In this article, I’ll be providing a look back at the year in GIMP for 2019, as well as a preview of what’s to come for the software in 2020.

2019 was a pretty successful year for GIMP, and users of the program overall were satisfied with the changes the GIMP team made. In a survey conducted on the Davies Media Design YouTube channel, 78% of users rated the evolution/progress of the GIMP program for 2019 a 7 out of 10 or higher (out of over 450 responses to the survey). Only 6% rated the program’s progress 4 out of 10 or less. I tend to agree with this positive assessment.

The GIMP team released 3 updates in 2019, including GIMP 2.10.10, GIMP 2.10.12, and GIMP 2.10.14. These new releases were each pretty significant, bringing lots of new features, functionality, and performance enhancements/bug-fixes.

For example, GIMP 2.10.10, which was released in early-April of 2019, introduced the highly-anticipated Smart Colorization feature, which allows users to easily fill in shapes comprised of hand-drawn lines in an image/illustration – even when the shapes aren’t perfectly or totally enclosed. This feature is great for illustrators, cartoonists, and anyone that creates sketches or drawings within the program and wants to be able to quickly color their drawings in.

GIMP 2.10.12, which was released in mid-June, saw less flashy changes, but it did make very important incremental improvements to things like tools, such as the curves tool – which was given a few upgrades, the painting experience (including when painting with the Symmetry Tool), and selection areas – which saw the introduction of a new style of committing and applying selections.

Finally, the release of GIMP 2.10.14 in late October capped off the year with some great additions – making it arguably the best of the three new releases on the year. The most notable improvements include the ability to show and edit objects outside of the GIMP canvas (a long-awaited feature known officially as the “Show All” mode), and the ability to apply filter effects outside layer boundaries (and thus prevent effects from getting cut-off by layer boundaries). There were also new filters added in this version, and the usual performance improvements to continue to make GIMP a more stable and powerful program.

If you’ve ever spoken directly to the GIMP team about future versions of GIMP, you’ll know that they don’t like to give hard answers on things like release dates or timelines when it comes to releasing future versions of GIMP. Thus, it’s anybody’s guess as to when the next new version of GIMP will be released.

One thing I have been told, however, is that the next planned release is going to be GIMP 2.10.16. And, since the usual time between non-major releases (2.10.x versions) is between 3-4 months, we can expect this latest version to come out some time between early February and March of 2020. It isn’t entirely clear as to what features will be released with this version, but we can anticipate things like minor upgrades to existing tools, updating GEGL and BABL, and the usual bug-fixes and incremental performance improvements.

To date, there have been nearly 500 bugs reported for GIMP 2.10 versions, with just over 70% of those bugs now being fixed/addressed. That means that approximately 30% of bugs remain for GIMP 2.10.x development (including GIMP 2.10.16). This is significant to note because bugs often get in the way of new releases – and the more bugs that stand in the way, the longer it will take for a new version of GIMP to be released.

I should note that developers do not rely on ALL bugs to be fixed prior to releasing new software – they may defer smaller bugs in order to push up the release date of new software. This all being said, there are only so many bugs that they are willing to defer, so the number of bugs remaining can still provide us with a pretty clear picture of how much work is left until a new GIMP release will be made available.

In a video I created at the beginning of 2019 recapping the previous year (2018) and highlighting what was to come for GIMP in 2019, I stated that the GIMP team was planning to release version 3.0 later in the year – which was set to be a major breakthrough for free software.

Well, unfortunately that didn’t happen (as many of you know), which means 2020 will continue our wait for this major release of the program.

The good news, though, is that it appears some serious progress is being made towards getting GIMP 3.0 released.

For starters, over 60% of the listed bugs for GIMP 3.0 have been fixed (or marked “closed”). This means a little less than 40% of reported bugs remain waiting to be fixed (some of these bugs will be more time consuming than others – though having more than half of these bugs fixed already is a good sign).

If you’re wondering why GIMP 3.0 will be so groundbreaking, the main reason is this: GIMP currently uses something called the GTK, which stands for the GIMP Toolkit. This toolkit, which is used by a variety of software – especially in the Open Source world, is “a multi-platform toolkit for creating user-interfaces.” In other words, it is essentially the foundation for GIMP, including how it looks and operates.

Currently, GIMP 2.10 versions use GTK+2 – which is an older and frankly outdated version of the GIMP Toolkit. When GIMP 3.0 is released, the GIMP Toolkit will be updated to a more modern GTK+3 – which should enhance the user interface, improve the application’s performance, and open opportunities for more features like non-destructive editing (think Photoshop’s adjustment layers).

There are plenty of other programs already out there that use GTK+3, which has been around for many years – so why hasn’t GIMP switched to it yet?

The answer is that GIMP is a very large and complex application with a large codebase (and many contributing developers). As a result, switching everything from GTK+2 to GTK+3 is extremely time consuming and requires a significant level of coding expertise. The GIMP development team has been working on “porting” GIMP to GTK+3 for some time now – so, thankfully, we are nearing the completion of this years-long project. My hopes are that GIMP 3.0 will be released before the end of this year. If I had to guess, I’d say we can anticipate the release between September and November of 2020 (though don’t hold me to that – I do not perform any development for the GIMP project and I was wrong with my prediction last year).

Some of the major features coming to GIMP 3.0 include Extensions Management, which will create a centralized location for all GIMP third-party resources (i.e. Plugins, Brushes, Pattersn, etc.), better Wacom tablet support, which will improve the digital drawing/painting experience with a tablet (currently a much-needed fix in my opinion), and improved animation features (currently the animation features in GIMP are abysmal – so this is another much needed feature improvement).

The highly-anticipated “layer adjustments” feature will not be available until GIMP 3.2 is released – which I believe won’t be until early- to mid-2021 at the earliest.

As always, I’ll be releasing new tutorials on the latest versions as they come out, so stay tuned to Davies Media Design throughout 2020! You can stay updated through our newsletter, GIMP Video Tutorials page, and GIMP YouTube channel. You can also get access to our premium content by becoming a DMD Premium Member today!