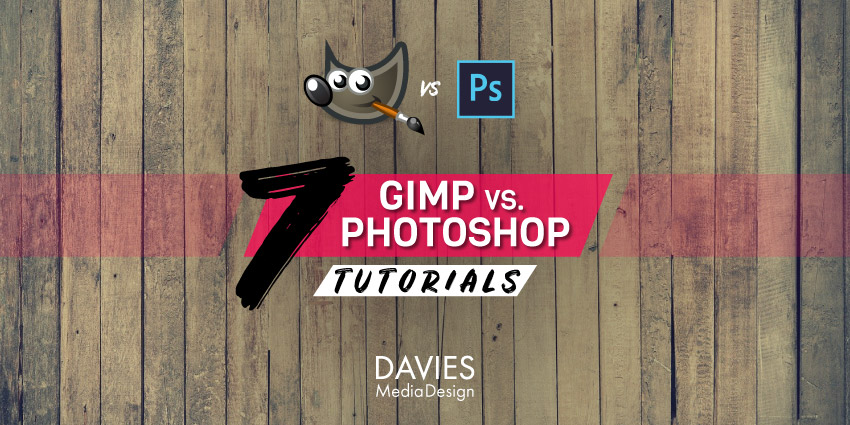 In the early days of GIMP and Photoshop, the two programs weren’t even close in terms of capability. Adobe’s flagship photo editing and manipulation software was leaps and bounds above everyone else, and people saw GIMP as a non-threatening alternative used solely by fringe, geeky Linux-loyalists.

Over the last decade, Photoshop’s popularity has soared to heights still unknown by other creative software, achieving every shareholder’s dream by transforming the brand into a common verb (can you “Photoshop” me out of this picture?).

The program even got a name drop in one of the newer James Bond films, Casino Royale, when the character Mathis says “It’s amazing what you can do with Photoshop these days” in reference to a document he forged to get the Italian Chief of Police arrested on corruption charges.

Yes, Photoshop’s lead in the photo editing and manipulation world was taken early in the history of such software – and for many years it grew exponentially larger against what few rivals it had. But while Adobe was continuing to utilize its billions to push Photoshop further into the stratosphere, the “little engine that could” that is GIMP (the Gnu Image Manipulation Program) rallied around unpaid, part-time developers and a community of content creators to continue innovating and iterating its little free software.

Fast forward to today, and Photoshop has begun to let its astronomical lead slip. Not only are there now some viable premium software alternatives, but GIMP’s volunteer army of developers has also beefed up the free Photoshop alternative with surprising features like high bit-depth image editing (up to 32-bit floating point precision), intelligent AI-driven tools like the Heal tool and Foreground Select tool, an improved user-interface including grouped tools and “dark mode,” and much more. Additionally, GIMP has some major updates on the horizon currently in development – including adjustments layers and full CMYK support.

Davies Media Design has created several tutorials directly comparing GIMP to Photoshop, which you can view below. In my opinion, this rivalry is just starting to heat up, and the more support GIMP can receive, the faster they can catch up to and surpass the behemoth that is Adobe Photoshop – making creativity free and accessible to many more millions around the world.

In this first comparison tutorial, I show a simple 5 step photo editing process using both GIMP and Photoshop. I use the same tools in each program to demonstrate how both programs contain very similar features and produce equal results. You can judge for yourself which photo edit you though came out better!

In this next tutorial, I show you how to customize the GIMP 2.10 user interface to look very similar to Photoshop CC 2020’s. This video demonstrates how both programs offer similar workspace layouts and feature dialogues, making it relatively easy for an Adobe Photoshop user to make the switch the free alternative GIMP. This video was created just before Grouped Tools were introduced in GIMP 2.10.18 – so adding that feature to the equation adds even more similarities.

Photoshop and GIMP share more common features than most people realize. This tutorial covers 10 features found in both programs – from canvas rotation, to the free transform tool (known as the “unified transform tool” in GIMP), to object and background removal tools, to the Quick Mask tool, and much more. Though GIMP does not contain EVERY feature found in Photoshop, it does have a majority of the most commonly used tools that are most useful for everyday photo editing and photo manipulation.

Though neither GIMP nor Photoshop are known for or primarily used for graphic design (each program has a vector graphics alternative), they do both contain a suite of features that allow you to create graphic design compositions. Both programs are perfectly capable of performing tasks such as logo design, business card design, web banner design, etc. From drawing and recoloring shapes, to scaling objects, to transferring images and objects from one composition to another, I compare some basic yet important design features and the different ways those features can be used in the two programs.

In this GIMP tutorial, I demonstrate how a free third-party plugin developed for GIMP – the GIMP Resynthesizer Plugin – actually performs better than Photoshop’s built-in Content Aware Fill. Both features were designed to quickly remove large objects from images that are overlaid on top of complicated backgrounds. They both also use sophisticated algorithms to perform the task, meaning the user has to do minimal work to get the job done. Though the Resynthesizer Plugin isn’t currently offered by default in GIMP, it can easily be downloaded via GITHub for free (I have a video on how to download and install the plugin for both Windows and how to install the plugin for MAC). There is also a movement to get the plugin included as a default feature in future versions of GIMP which appears to be gaining steam (other third-party plugins have been added to GIMP as defaults in the past – so it’s not so far-fetched of an idea).

6. GIMP vs. Photoshop: Blend If + Color to Alpha Compared

Photoshop has a popular and powerful tool known as “Blend If” that allows you to easily make a certain color or luminance value transparent for a layer, thus blending whatever is on that layer with the layer below. This is a great way to create effects such as painted wall graphics, or to add any type of texture or blended image from a bottom layer to a top layer. GIMP has an equivalent built-in feature known as “Color to Alpha” that performs the same task and produces a very similar result.

In the last tutorial on this list, I provide what I think are 10 very compelling reasons to use GIMP 2.10 over Photoshop CC in 2020 (Reason #10 is a little controversial). Reasons covered in the video include the fact that GIMP is free, there are free supplemental programs to aid GIMP (i.e. RawTherapee or Inkscape), there are tons of built-in image adjustment features, there are a variety of helpful editing and design tools available in the GIMP Toolbox, and so on. If you’re on the fence about making the switch, or simply want to hear what makes GIMP so great in 2020, I highly recommend watching this tutorial.

That’s it for this list on 7 GIMP vs. Photoshop tutorials! What surprised you the most when seeing the two programs directly compared? Think you’ll finally make the switch from premium to free software? Though GIMP has come a long way, it still certainly has a long way to go – but the road ahead looks very promising with many great features in the GIMP developers’ pipeline. Keep your eye on this amazing software – I think it truly has the potential to change the world (and the creative software industry)!

If you liked this article and the tutorials featured in it, you can check out more videos on my GIMP Video Tutorials page, read more GIMP Help Articles, or enroll in a Premium GIMP Class or Course to master this program. You can also get more with a Premium Membership to Davies Media Design, including bonus Premium Video content and unlimited access to our Help Articles each month.