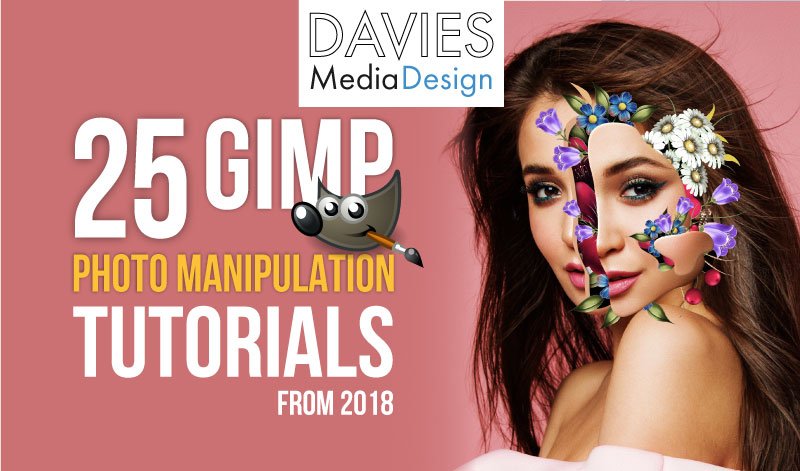 GIMP is surprisingly good at creating photo manipulation compositions. I think this fact shocks people on a daily basis when they come across our GIMP tutorials on YouTube and see the sorts of things that are dreamt up within the program. Add to that that GIMP is completely free, and you have a perfect storm for creatives looking to create stunning artwork without emptying their bank account.

Davies Media Design has made it a personal mission to shift the paradigm of the design world and wake people up to how good GIMP has become in the last few months. Earlier this year, GIMP released GIMP 2.10, which came loaded with some great feature, but then one-upped themselves by introducing some performance updates and additional features in GIMP 2.10.2 thru 2.10.6. Today, GIMP 2.10.6 is a seriously awesome program that rivals Photoshop, and its just the tip of the iceberg (GIMP 3.0 just might break the internet).

But that’s enough bragging for the GNU Image Manipulation Program (what GIMP stands for). Let’s dive into our list of the Top 10 GIMP Photo Manipulation Tutorials on Davies Media Design, the largest active GIMP-dedicated YouTube channel on the planet!

In this GIMP Photo Manipulation tutorial, I show you how to make it appear as if it is raining in your photo using a combination of the free G’MIC plugin and some rain photos. By compositing multiple images together, applying the effect from the plugin, and making adjustments to the image’s color, you get a very realistic rainy photograph!

Brightly lit photos, especially those with a horizon line in them or a lot of natural daylight, can be drastically enhanced by adding a golden glow to the lighting and the overall photo. This golden glow make the bright lighting appear more natural, vibrant, and warm, and can uplift the mood of your image. Find out how to accomplish this effect in our tutorial!

Photoshop uses a feature called Content Aware Fill to quickly erase objects from images. The only problem is that Photoshop costs up to $60 per month. GIMP, on the other hand, which is totally free, has a plugin called Resynthesizer that also quickly erases objects from photos. Also, in my opinion, this plugin actually works more easily and effectively than Photoshop’s Content Aware Fill. Try it out for yourself!

4. How to Transform the Body in GIMP 2.10 (Warp Transform + Cage Transform)

Need to make some minor adjustments to your model? Photoshop made this process famous (and infamous) – especially in instances when photo retouchers took the process too far and totally transformed models for major magazines like Vogue. However, performing transformations on your model in the photo editing world can be a more subtle and honest process, and can enhance the model and the overall photograph when done right. We show you how to perform transformations in GIMP using the Warp Transform Tool and the Cage Transform Tool.

Creating a Tiny Planet or “Little Planet” – as the GIMP team has called it – has been a very popular photo manipulation composition for many years now. But GIMP 2.10.6 has recently come out with a new Little Planet Filter to make this process way easier and faster. In this GIMP tutorial, I show you how to use the Little Planet Filter to achieve this effect in minutes.

One of the most common photo manipulation tasks to perform when editing a photo is to remove blemishes from a model as well as fix the skin complexion (i.e. making it more even or removing shine). In GIMP, these tasks are super easy, and I show you how to perform them in the tutorial above.

Learn how to apply gradient maps to your photos and compositions, which is a simple yet effective photo manipulation technique that gives you the ability to map colors from a gradient to colors in your image. When combining this feature with layer modes, you can blend gradient colors into your image’s original colors and create stunning, colorful compositions that have a different mood from the original mood of the image.

Famous Instagram photographer Brandon Woelfel has a very unique and popular photo editing style that is emulated across the internet. His beautiful models are typically holding a light source, and the images’ backgrounds take on shades of pink and teal. Additionally, his image are taken at night but are fairly bright with low contrast. I show you how to achieve this look in your image editing with this GIMP 2.10 Photo Manipulation tutorial.

When taking photos of subjects or models that appear to be sitting in a cafe or really any public environment, it can add to the atmosphere or the story told by the image when you create a window reflection over your subject. In this GIMP 2.10 tutorial, I show you how to add window or glass reflections to your images – making it appear as if you took your photo on the street looking through glass.

Photoshop’s popular Liquify tool allows you to create caricatures from your subjects by shrinking, enlarging, or just warping features of the body and face. Well, GIMP lets you do the same exact thing using something called the Warp Transform tool – and the results are truly awesome!

Have an old photograph of your great-grandma that’s been sitting in a box for decades? Need to fix all the folds, wrinkles, splotches, tears, and missing patches that have found their way to the photo after all these years? GIMP has several tools that can tackle this job – including the heal tool, resynthesizer plugin, and the paint brush and airbrush tools. I show you how to fix old, severely damaged photos in this tutorial.

This tutorial uses a combination of photo editing, graphic design, and photo manipulation to create an eye-catching, abstract neon design featuring some ballet dancers. The shapes appear to give the photo a 3D element, and underscore the movement of the dancers. They also add to the overall mood of the image. Learn to create this composition in our Abstract Neon Design Photo Manipulation tutorial!

This tutorial is a more advanced photo manipulation composition (though it is explained in a way that makes it easy for beginners to follow) the creates a composite of multiple images to make it appear this photo was taken on an alien planet. You will also learn how to shift the colors in your image and add effects like rain, fog, and lightning to create the overall stormy alien-planet beach.

This “Flower Face Effects” tutorial was inspired by famous Brazilian Instagram artist Marcelo Monreal. In his compositions, Monreal combines photos of beautiful models with illustrations of flowers to make it appear as if the flowers are coming from the core of the person. This Dali-like technique can be created using a combination of the paths tool, long-shadow filter, and image adjustments all within GIMP 2.10.

17. GIMP Tutorial – How to Paint Graphics on a Face

We’ve discovered a cool way to overlay any graphics on a person’s face to give the appearance that their face was painted with that graphic. This is a great effect for showing team spirit, or simply adding a stylish, creative graphical element to your photo.

It is common in photography to capture a great photo of an object or person in an image, but to have the sky look dreary and dull. In this GIMP Photo Manipulation Tutorial, I show you how to replace the sky and adjust the image accordingly to make your images look like they were taken on a bright sunny day.

A popular yet simple photo editing technique is to crop images into a circle shape. In this tutorial, I show you how to accomplish this task using the ellipse select tool and exporting your final image to the right file type.

Unless you have a top-of-the-line camera and a top-of-the-line lens, night photos will usually come out dark and grainy despite having the proper settings on your camera. I show you how to fix this common problem using some effective techniques found in GIMP.

Combining text and photography can create a wonderful result – as shown here in this tutorial on how to create photographic typography. The effect can be further enhanced when the photos you use correspond to the letters you combine them with. In this case, I show you how to remove the background of a hummingbird photo and combine it with the letter “H.”

Sports photos tend to have dramatic, gritty compositions to highlight the intensity of the scene and the details, such as sweat, that define an athlete in the moment. In this GIMP 2.10 tutorial, I show you how to create a gritty fitness photo using photo enhancing techniques such as sharpening and vignetting.

The second famous Instagrammer on this list is Sam Elkins – a photographer who combines beautiful female models with flowers to create elegant photo compositions. Elkins also has a distinct style of coloring his photos, which I go over how to duplicate in this GIMP 2.10 tutorial.

Action photos tend to look a bit better when the subject appears to be in motion via common indicators – like motion blur. In this tutorial, I show you how to add motion blur to action photos to help your moving subject stand out.

In today’s world, cell phones are gradually replacing DSLR’s as the camera of choice for the everyday consumer and amateur photographer. While the cameras on our phones are getting better and better, there are still some things you can do in the digital dark room to make your cell phone photos look much more professional and eye-catching. I show you how to accomplish this in this GIMP 2.10 tutorial.

Want more tutorials? Visit our GIMP Tutorials page on our website or see our over 100 GIMP video tutorials on our GIMP YouTube channel!