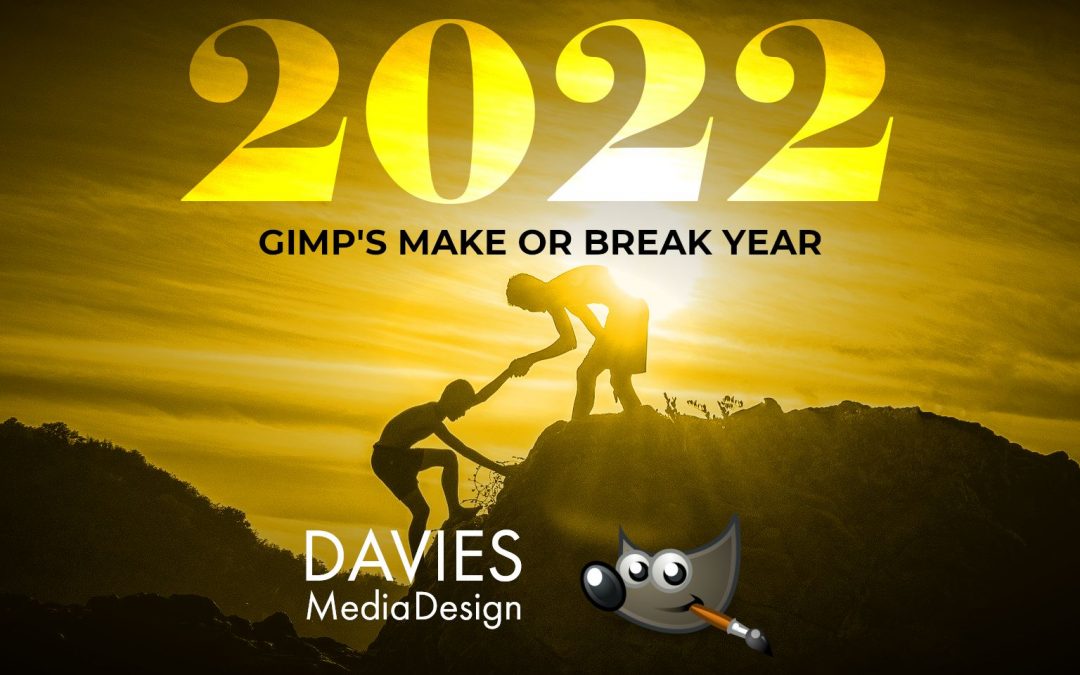 Let’s be real for a second – GIMP has been struggling as of late. In a rapidly changing world (especially when it comes to photography and photo editing software), the GNU Image Manipulation Program can’t seem to find its footing.

That’s not to say that the program isn’t a great program – it’s still the best free photo editing alternative to Photoshop as of 2021.

However, that title may fall in the coming year as other free software like Darktable and Krita continue to make massive strides in development and pump out new release versions. (I should note that neither of these programs currently focuses on photo manipulation at nearly the same level that GIMP does).

So what’s causing this GIMP slump? Is it that free software is finally on its way out and paid programs like Adobe or Affinity Photo have finally won?

After all, Blender, the free 3D CG software, took the internet by storm in 2021 with its release of Blender 3.0. It’s also been collecting gigantic corporate sponsors to help fund its development like its nobody’s business, signing on the likes of Intel, Adobe, Apple, and AWS as corporate sponsors.

So what’s going on with GIMP?

The last two GIMP release versions, GIMP 2.10.28 and GIMP 2.10.30, were very light in features. In fact, the “marquee” new features in each of these two new releases would have been footnotes in any other software release.

The reasons given by Jehan, one of the core contributors for GIMP, for the super-light release versions as of late is that most developer manpower is currently being directed towards GIMP 3.0 and a code infrastructure overhaul for GIMP.

This is likely mostly true, though it also appears that GIMP’s overall number of contributors and commits is way down compared to previous years. Usually the monthly commits number stays above 100, yet it was below that threshold for 75% of 2021.

On top of that, the average number of active contributors per month on the GIMP project in 2021 was around 7. This was a 15% decrease from the year before.

So, the numbers don’t look great right now, but the GIMP project is not dead. Yet.

That’s why 2022 is, in my opinion, a make-or-break year for GIMP. If the number of commits and contributors continue to trend downward for a third straight year (they were down in 2020 as well), GIMP could be in some serious trouble in terms of being a sustainable free project.

If, for example, GIMP continues to only produce 2.10 releases with no major new features (i.e. GIMP 2.10.32 through GIMP 2.10.38, all highlighted by updated file format support), it could cause user interest to get dangerously low and developers to find new projects. With its user-base and talent leaving in droves, GIMP 3.0’s release timeline could continue to get stretched out into the infinite and perhaps never see the light of day.

If, on the other hand, GIMP finally releases GIMP 3.0 in 2022, the program will see a massive revival of user interest and an influx of developer commitment. It can then use this surge in support to springboard itself back to life and begin implementing highly-anticipated features like smart objects (known as “linked layers” in GIMP), adjustment layers, animation features, and vector text and shape tools.

As it stands now, GIMP needs serious help. Jehan, in his “2021 Annual Report” for GIMP, awkwardly admits that he’s been basically carrying the team all year when it comes to the program’s development. In the report, he outlines how he’s the only developer with over 500 commits on the year, with the next closest developer contributing around 100 commits.

The good news is that there were nearly 3x as many commits in 2021 made to the unstable development versions of GIMP (2.99.x versions), which will become GIMP 3.0, versus the stable GIMP 2.10.x versions.

Jehan has also admitted on other platforms (like Twitter) that he’s not making enough money to work on GIMP full-time (or at least work on it full-time while being paid a livable wage). This exposes another issue with GIMP – it doesn’t seem to have any money.

This may seem unsurprising to some of you seeing that GIMP is a free program and thus has no real revenue model. However, as I mentioned earlier in this article, other free software projects (mostly Blender) are money making machines and can pay their developers (and other staff) living wages via donations.

Honestly, though, I don’t think money is the primary issue with GIMP’s development. Although more money would certainly help the current situation. If GIMP had access to more developer talent (i.e. more people volunteered their time to help develop GIMP), the project wouldn’t need to lean so heavily on one person to get the job done. That’s kind of the whole point of free and open source software – many people contribute free time to the project to create the software they want.

By divvying up the work, no one person is dedicating too much of their time to see the thing through (and thus needing to be compensated for their time so they can pay their bills).

GIMP is an ecosystem – a feedback loop. When one piece of the puzzle is out of sorts, it affects the whole project. For example, by having more developers contributing to the project, GIMP can implement new, highly-requested features that reach a wider audience (i.e. animation features or adjustment layers). By reaching a wider audience, it can increase its funding and developer talent base, thus allowing it more resources to continue adding new features.

I have spent a lot of time identifying the problems with GIMP. But how does GIMP fix these problems? It’s easier said than done, but I’ll say it anyway.

I have been making tutorials for GIMP for over 10 years now. To this day, there are many times I interact with the GIMP team (usually through social media) and get a prickly response. I also see this in GIMP’s interactions with people who bring up frustrations using the program on social media.

This is a culture problem.

GIMP needs to improve its interactions with its community. It needs to be more patient when people approach them with issues, especially in a public setting like on social media.

When people see that GIMP is a pleasure to interact or work with, those people will take the leap to contribute to the project. When GIMP seems standoffish and confrontational, it turns talent away.

Inkscape, Darktable, Krita, and Blender all take a much better approach when it comes to their public persona and interacting with people. If GIMP could study and adopt their approaches, they could begin to address their culture problem and heal their reputation.

In all fairness, Jehan appears to be heading in this direction. In his 2021 Annual Report, he mentions that “social skills” and “being a good person and nice to others” are two major priorities when choosing new core contributors to delegate important tasks to.

GIMP’s fundraising structure is currently all over the place and not entirely transparent.

For example, the “Donate” page on the website starts with two donation buttons. One button is for Oyvind Kolas, a major GEGL contributor, and the other is for the ZeMarmot project, a “free movie” animation team. The buttons link to their Patreon accounts.

Both Oyvind Kolas and the ZeMarmot project contribute tremendously to GIMP – but if you don’t follow GIMP everyday like I do, that may not be super apparent based on the names of the projects they work on (the ZeMarmot project is Jehan’s project – along with his partner Aryeom).

The words “Gnome Foundation” are linked to the Gnome home page, and it is then up to the visitor to figure out where to go from there to donate to GIMP.

I personally think there needs to be a dedicated landing page on the Gnome website that provides more information as to how to donate to GIMP through Gnome, how much money has been donated using this method through other donors on a monthly basis, and where the money goes. Right now its hard to tell how much impact a donation is having because none of this information is available on the Gnome home page.

It does say in the next paragraph below: “So far donation through GNOME Foundation can only be used for community needs (conferences, developer meetings…) and material renewal.” So none of your money to Gnome goes directly toward GIMP’s development – which is especially true right now considering COVID has shut down in-person events.

Below the Gnome link are additional links to payment gateways that visitors can select from in order to submit a donation. PayPal is the most recognizable gateway, though this appears to go to the Gnome project (which we just discussed). In my opinion, LibrePay has the most potential of the listed gateways because it provides data on how much money is raised each week and who gets what portion of the proceeds. However, the downside is that LibrePay is listed in Euros. As someone who lives in the US and uses US dollars as currency, it reduces the trust factor when I see a currency other than dollars listed. I can also see this being confusing to people from around the world who want to donate in their currency but only see Euros.

It could take a page from Krita’s book as their “Fund” page includes interactive graphs, as well as rewards tiers for donors. Additionally, when you click on a donation tier, the link takes you directly to a checkout page with information on how Krita collects the donation. There’s one link – not several – and the payments appear to be centralized.

My final proposed solution for increasing GIMP’s available resources is to make contributing to the project easier. While GIMP’s “Get Involved” page is an effective landing page in terms of laying out what exactly people can do to help, it needs to do a better job in defining how exactly people can help.

I think this issue can be solved with a simple video tutorial or article for each contribution method. The tutorial should show people what websites they’ll need to visit, if they’ll need login credentials (and how to get or create them), and provide an example of a commit or contribution (i.e. showing the full process for providing a translation or creating a tutorial for the website).

There are many people whom have little to no experience contributing to a software project, so walkthroughs and clear direction would drastically increase the number of people willing to give it a go.

2022 will be a make or break year for GIMP. I believe it can be a “make” year simply by getting the project more organized and making contributing more inclusive and intuitive. It can look to other Free and Open Source Software projects that are currently booming (i.e. Krita, Darktable, and Blender) and adopt some of their techniques. Finally, by getting GIMP 3.0 out in the open, paired with the above changes to its culture, fundraising, and contribution accessibility, it can lay the foundation for a much more productive, successful, and sustainable future.

Thanks for reading this article! You can check out more content on FOSS (Free and Open Source Software) on the Davies Media Design home page.