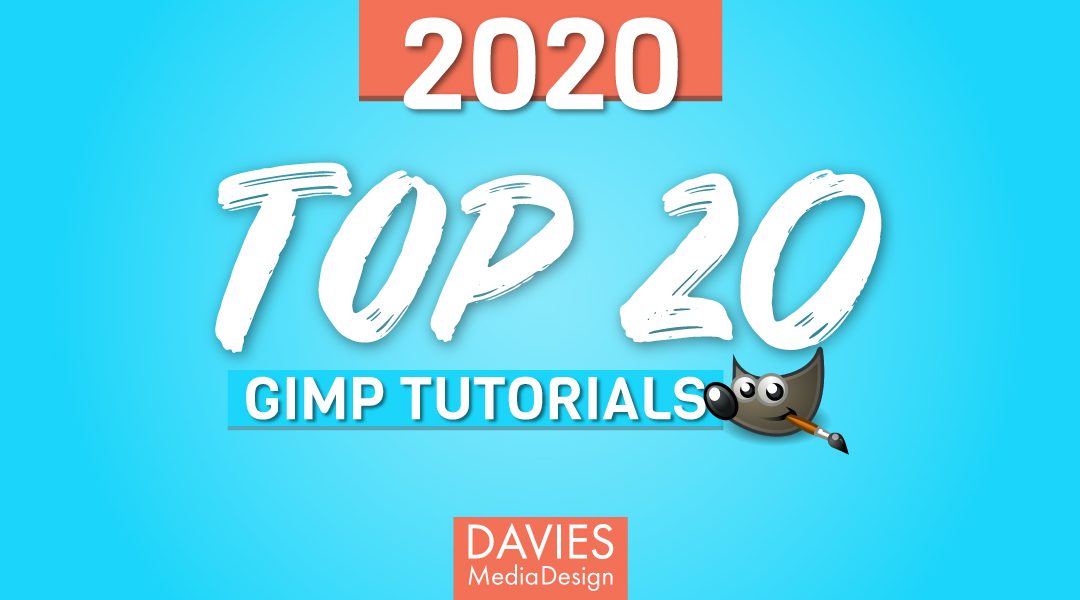 2020 was an insanely crazy year to say the least. However, despite the chaos, Davies Media Design has still managed to put out quite a few GIMP tutorials on the subjects of photo editing, photo manipulation, graphic design, and Photoshop vs. GIMP – among other things.

So, as is tradition around here, I’ve compiled the Top 20 Best GIMP Tutorials of 2020! All of the tutorials on this list are free video tutorials from the Davies Media Design YouTube channel. Enjoy!

20. How to Use the Curves Tool in GIMP

Kicking off this list of the best GIMP tutorials of 2020 is one that covers the common yet important Curves tool. This tool allows you to edit the luminance values of your photo using a curve, as well as the color balance of your photo using curves for each color channel. Though this tool can seem intimidating at first, I cover it in-depth in this video to make it easy for beginners to follow. This is a great photo editing tutorial to kick off the best GIMP tutorials of 2020 list!

19. How to Easily Denoise Photos in GIMP

Up next is my tutorial on how to easily de-noise your photos in GIMP. This video covers the two primary types of image noise – including chroma and luminance noise – and how to minimize this noise to improve the clarity of your photos.

18. How to Animate a Still Photo with GIMP

Want to bring your still photos to life? In this video, I show you a really simple and effective way to animate your images so that they appear to come alive! In this example, I animate the water in a waterfall using a feature found in the popular G’MIC plugin.

17. How to Colorize Black and White Photos with GIMP

In this GIMP 2.10 tutorial I show you how to colorize your black and white photos. This simple technique allows you to realistically restore color to desaturated photos without needing to spend hours on each photo.

16. How to Create a Neon Glow Effect in GIMP (Photo Manipulation)

In this GIMP photo manipulation tutorial I combine graphics and lighting effects to create a realistic neon glow effect around a subject. You’ll learn how to create neon lighting, while also having the neon object interacting with elements in your photo. Learn GIMP’s graphic design and photo manipulation tools with this beginner friendly tutorial!

15. How to Install PhotoGIMP (Windows) | Easiest Way to Switch from Photoshop to GIMP

Want to make your GIMP user interface look and act more like Photoshop? My friend Dio over on the DioLinux channel has put together an amazing GIMP plugin to help you do just that. The plugin not only re-styles GIMP to look more like Photoshop, but also adds additional brushes and fonts while changing the default GIMP shortcut keys to match Photoshop’s.

Layers are essentially the backbone of GIMP. They play a large role in non-destructive image editing, stacking graphics, blending multiple images, and pretty much doing anything beyond simple photo editing. In this tutorial, I cover GIMP layers in detail, while also getting into the more advanced topic of Layer Masks.

In this tutorial, I cover all the important points I believe beginners need to know when first starting out with GIMP. You’ll be able to confidently navigate your way through GIMP at the end of this 25 minute tutorial, which acts as a springboard for anyone wanting to finally get to know this awesome free photo editor.

GIMP’s many filters provide a variety of ways of adding effects to images and graphics in your compositions. In this tutorial, I outline my top 10 favorite GIMP filters that I’ve discovered and used frequently over my 10+ years of designing and editing photos in GIMP.

GIMP 2.10.20 was release in June 2020, and it didn’t disappoint! In this tutorial, which is part of my “What’s New in GIMP” series covering each latest release version of GIMP, I discuss all the new features found in GIMP 2.10.20. The most notable features include the new Vignette filter on-screen controls, new blur filters, and the new non-destructive crop tool. Check out every new feature found in this latest version!

The Quick Mask is an easy and powerful way to create selections and layer masks in GIMP. A staple in the photo editing and photo manipulation software world, this tool allows you to use the various paint tools in GIMP to create areas of transparency or partial transparency, while also allowing you to transfer selections or layer masks from one image to the next. You’ll love this in-depth tutorial from Davies Media Design on one of the most handy tools in GIMP 2.10.

9. Turn Any Photo Into a Cartoon in GIMP

Learn how to convert any photo into a cartoon using some amazing filters and effects in GIMP! The features covered in this tutorial are both built-in and found in free, reliable third-party plug-ins (I use G’MIC for part of the tutorial). The final effect is very easy to create and looks great!

GIMP 2.10.18 was also released in 2020 (in February) – and with its release came some major changes. With this new version, the GIMP team introduced “Grouped Tools” in the toolbox by default. This layout is similar to Photoshop’s grouped tools, and it also helps clean up the user interface and leave more room for the canvas. The biggest introduction for this version, however, is the brand-new 3D Transform tool! Check out this and other features in this in-depth video tutorial.

7. 5 Ways to Remove Anything from a Photo in GIMP

There are tons of ways to remove objects – both large and small – from GIMP while getting a highly realistic result. In this tutorial, I show you 5 tried and true methods for removing anything from a photo while still maintaining the integrity of the rest of the image.

In this GIMP retouching tutorial, I show you how to use an easy 5-step process for getting rid of acne, blemishes, or any other imperfections in your photos. This process preserves your model’s skin tones and create a smooth complexion (without looking artificial).

Want to learn all the best ways to style or add effects to your text in GIMP? In my “Top 5 Text Effects in GIMP” tutorial, I showcase all the best filters and effects you can use to spruce up your text. You’ll learn a variety of techniques, including adding drop shadows, making your text 3D, and coloring your text with gradients. There’s a reason this tutorial cracked the top 5 tutorials of 2020!

Number 4 on this list is my controversial “10 Reasons to Use GIMP in 2020 Over Photoshop” tutorial – which took some jabs at the Adobe behemoth and showed why GIMP is such a powerful free alternative in 2020. Reason #10 set some people off – the truth hurts!

Moving up to the number 3 spot is my tutorial on how to download and install free fonts in GIMP (previously at number 5)! Free fonts extend GIMP’s capabilities and can up the value and appearance of your designs. In this popular tutorial, I show you how to install free fonts for GIMP, as well as the best free fonts to use for your design projects. This is a great GIMP Basics tutorial for beginner GIMP users.

The number 2 GIMP tutorial of 2020 from Davies Media Design shows you how to make your GIMP user interface look like Adobe CC 2020’s. I show you how to rearrange your dockable dialogues as well as your toolbox to closely match Photoshop’s. Plus, I show you how to set up GIMP’s dark theme with symbolic icons. The final result is a UI that those of you switching from Photoshop will feel more familiar with.

1. Photoshop vs. GIMP: A Complete Comparison

Coming in at number 1 on this list is my most comprehensive GIMP vs. Photoshop tutorial, as this one takes a deep-dive into each photo editing program. In the video, I provide a list of pro’s and con’s for each software. In the end, viewers will find that BOTH programs are extremely powerful for a variety of reasons, but only one program is totally free.