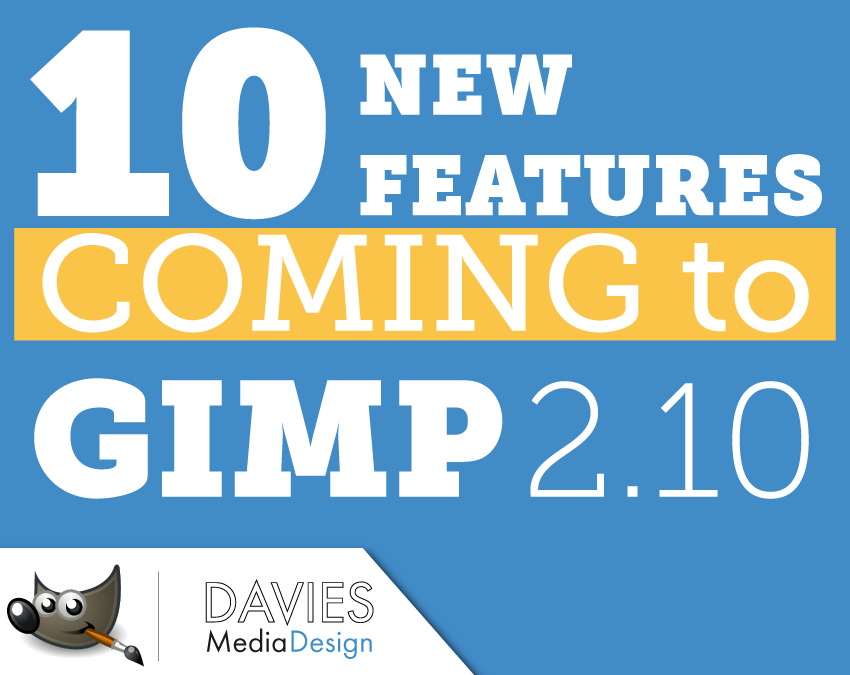 (UPDATED 5/2/2018) Pat David, a leader on the GIMP Development Team, recently spoke at the SCaLe 16x (Southern California Linux Expo) about upcoming features coming to the recently released GIMP v2.10. Plus, he provided some much-needed updates on the progress of GIMP’s development, and what the future will hold for the Open Source program and its community of part-time developers.

CHECK IT OUT – Watch our comprehensive tutorial on the GIMP 2.10 Basics: Complete Overview for Beginners

For example, after admitting that it has been WAY too long since the last stable release of GIMP (7 years to be exact), he promised that one of the new features coming to GIMP was less time in between stable versions. This is awesome news!

We took notes on what’s new to version 2.10 and have brought them to you here for your reading enjoyment, and to get you prepared for the awesomeness to come. Plus, we’ve put some of the more techie items into laments terms so that you’ll know how the new features benefit you as an end-user. Note – some of these things have been available in GIMP 2.9.8, GIMP 2.10-RC1, and GIMP 2.10-RC2, which we have done several tutorials for on our channel, but these were the “Development Versions” that still had bug fixes to be worked out.

In the new GIMP 2.10, you have more options to change up how your GIMP looks – with new icon sets, new theme colors, and new layout options. For those of you whom are very particular about your GIMP workflow and aesthetics, you’ll be happy with your ability to customize your GIMP.

GIMP v2.10 has improved its color management, allowing for higher-quality images to be edited with more precision at faster speeds – plus you’ll see a better representation of colors on your canvas while you edit. GIMP rolled out a feature for processing with precision of 16-bit and 32-bit per color channel with its GIMP 2.9.2 unstable development version (this is an upgrade over previous versions). This functionality is available in the v2.10 without any bugs/glitches!

GIMP has been using GEGL filters for several years now, including in its 2.8 release, but it is expanding its total number of GEGL features for 2.10. It is even replacing some of its previous filters with GEGL versions, as GEGL, which stands for “General Graphics Library,” is “non-destructive” and thus is a better long-term solution to keep the GIMP program flexible.

If you aren’t excited for adjustment layers coming to GIMP right now, you should be!

4. Filters Will Use On-Canvas Editing

In the past, when you applied a filter to your image on GIMP, you had to make your adjustments to the filter, then hit “apply,” then wait for the program to process and apply the effect to your image. However, in GIMP 2.10, filters use on-canvas editing, meaning the changes or adjustments you make to your filters will show up on your image in real-time. This allows more flexibility in image editing and a faster workflow.

For those of you who have been keeping up with our latest tutorials on our YouTube channel, you’ve probably noticed that GIMP 2.9.8 already had a fully-operational “split-preview” option that allows you to split your canvas and see a direct before (one side of the split preview line) and after (the other side of the split preview line) of the effects you are applying to your image.

This is super useful as you can see the difference effects make on your original photo (prior to applying effects) with a direct side-by-side comparison. You can even move the split preview line so you can compare various parts of your image. This is definitely one of my favorite new features!

GIMP is making its transform tools (i.e. scale, flip, rotate, etc.) faster and giving them more functionality for GIMP 2.10. This will improve your workflow and make it easier to perform transformations on your image. Plus, the GIMP team has brought the “Unified Transform” tool to GIMP, which will combine several transform tools (rotate, scale, skew, perspective) into a single, unified tool.

I’m pretty excited about this tool! GIMP is bringing a “full integration search” feature to 2.10, which will allow you to search for features/functions/filters, etc. directly in a search box, and then click on that item and start using it immediately. This will make GIMP more beginner-friendly and intuitive as you’ll be able to type in keywords to find certain items in GIMP.

Artists whom enjoy using GIMP as a drawing program can now rotate their canvas while they work! This is great for people who are used to turning their paper while they draw – and thus can provide a more natural way of working within GIMP when using a drawing tablet. This is also a useful tool for general GIMP graphic designers who need to rotate the canvas for any reason to make it easier to edit items on screen.

GIMP has added 10 new blend modes to get it caught up with other photo editing and manipulation software. Pat recognized that some of the blend modes currently not found in GIMP are found almost across the board – but GIMP 2.10 will take care of this issue.

New blend modes coming to GIMP will include:  pass-through, linear burn, vivid-light, linear light, pin light, hard mix, exclusion, and more. These blend modes allow you to apply more effects to your images or layers, which can greatly improve the overall result.

GIMP has updated some of its existing layer modes to improve their effects and bring them up to modern standards.

GIMP 2.9.8 currently claims to support this feature, but I haven’t had any luck getting it to work properly in multiple attempts. However, in the stable 2.10 version, GIMP has made feature bug-free, thus allowing users to seamlessly open RAW images into GIMP without needing to manually set up third party RAW plugins. I recommended checking out our tutorial: How to Open RAW Images in GIMP 2.10 to see how this is done.

This is how Photoshop currently works – it uses a third-party plugin called “CameraRaw,” but it integrates so seamlessly that it seems like Photoshop just has a proprietary RAW plugin built into it.

So, GIMP will make editing RAW images much more user-friendly and intuitive in its upcoming version.

GIMP v2.10 is a game changer for open source programs as it will finally close some major gaps between itself and premium editors (like Photoshop). Plus, with less time between stable releases, GIMP will only continue to improve at a faster pace, allowing for designers around the world to create professional compositions without needing to drop serious money on a monthly subscription!