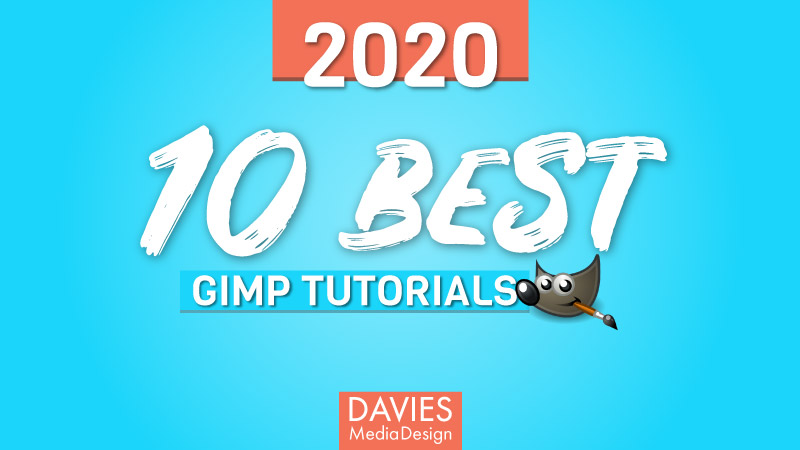 2020 has been an insanely crazy year to say the least. However, despite the chaos, Davies Media Design has still managed to put out quite a few GIMP tutorials on the subjects of photo editing, photo manipulation, graphic design, and Photoshop vs. GIMP – among other things.

So, as is tradition around here, I’ve compiled the Top 10 Best GIMP Tutorials of 2020 so far! All of the tutorials on this list are free video tutorials from the Davies Media Design YouTube channel. Enjoy!

10. How to Use the Curves Tool in GIMP

Number ten on my list covers the common yet important Curves tool. This tool allows you to edit the luminance values of your photo using a curve, as well as the color balance of your photo using curves for each color channel. Though this tool can seem intimidating at first, I cover it in-depth in this video to make it easy for beginners to follow. This is a great photo editing tutorial to kick off the best GIMP tutorials of 2020 list!

The Quick Mask is an easy and powerful way to create selections and layer masks in GIMP. A staple in the photo editing and photo manipulation software world, this tool allows you to use the various paint tools in GIMP to create areas of transparency or partial transparency, while also allowing you to transfer selections or layer masks from one image to the next. You’ll love this in-depth tutorial from Davies Media Design on one of the most handy tools in GIMP 2.10.

Ever wonder how GIMP’s best smart-selection tool compares to Photoshop’s? In this tutorial, I give each program 90 seconds to remove an image background using their best tools – the Foreground Select Tool in GIMP and the Select Subject tool in Photoshop. The results will surprise you, which is probably why so many people love this GIMP vs. Photoshop tutorial!

7. Photoshop vs. GIMP: A Complete Comparison

Coming it at number 7 on this list is another GIMP vs. Photoshop tutorial – though this one takes a deep-dive into each photo editing program. In the video, I provide a list of pro’s and con’s for each software. In the end, viewers will find that BOTH programs are extremely powerful for a variety of reasons, but only one program is totally free.

At the very beginning of 2020 I put out a tutorial recapping the 2019 year for GIMP and forecasting the road ahead. I discussed all the updates that have been made to GIMP and what can be expected for the rest of 2020 as well as 2021. I’ve been right in the past and wrong in the past with my predictions – how will I fare this time around?

Free fonts extend GIMP’s capabilities and can up the value and appearance of your designs. In this popular tutorial, I show you how to install free fonts for GIMP, as well as the best free fonts to use for your design projects. This is a great GIMP Basics tutorial for beginner GIMP users.

GIMP 2.10.20 was release in June 2020, and it didn’t disappoint! In this tutorial, which is part of my “What’s New in GIMP” series covering each latest release version of GIMP, I discuss all the new features found in GIMP 2.10.20. The most notable features include the new Vignette filter on-screen controls, new blur filters, and the new non-destructive crop tool. Check out every new feature found in this latest version!

GIMP 2.10.18 was also released in 2020 (in February) – and with its release came some major changes. With this new version, the GIMP team introduced “Grouped Tools” in the toolbox by default. This layout is similar to Photoshop’s grouped tools, and it also helps clean up the user interface and leave more room for the canvas. The biggest introduction for this version, however, is the brand-new 3D Transform tool! Check out this and other features in this in-depth video tutorial.

Moving into the top 2 – my controversial “10 Reasons to Use GIMP in 2020 Over Photoshop” tutorial took some jabs at the Adobe behemoth and showed why GIMP is such a powerful free alternative in 2020. Reason #10 set some people off – the truth hurts!

The number 1 GIMP tutorial of 2020 from Davies Media Design shows you how to make your GIMP user interface look like Adobe CC 2020’s. I show you how to rearrange your dockable dialogues as well as your toolbox to closely match Photoshop’s. Plus, I show you how to set up GIMP’s dark theme with symbolic icons. The final result is a UI that those of you switching from Photoshop will feel more familiar with.

Sign up to receive new tutorials, course updates, and the latest news!