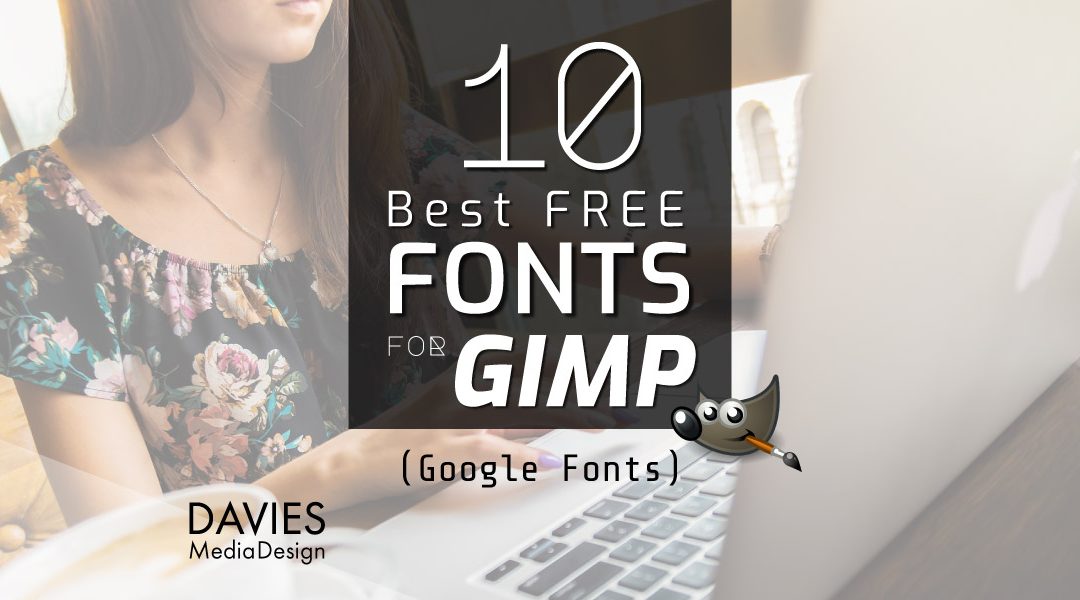 Finding free, reliable fonts to download and install for GIMP can be a real pain – especially when you’re not sure if a font is safe or will be compatible with GIMP. In this tutorial, I’ve compiled a list of what I believe are the 10 best free fonts for GIMP. I have sourced all of these fonts from Google Fonts, which is a free and reliable source for downloading fonts for any project (both on a desktop for things like graphic design projects or on the web for things like web design). Google also tends to produce or host fonts that perform faster than independently made fonts – so they shouldn’t slow down your system when working with them.

Simply click the name of the font or the picture of the font to be taken to the Google Fonts page where you can download the fonts for free.

If you aren’t sure how to download and install fonts for GIMP, I recommend checking out my GIMP Help Article on the subject for Windows users, or this article on How to Install Fonts for MAC users. You can also watch the video tutorial below.

This popular and widely-used font is a great sans serif font for projects that require a lot of paragraph or page titles. It comes in quite a few variations, including “thin 100” for a slimmer profile, and “black 900 italic” for a thicker look.This font is versatile enough to use in logos as well as general titles – and is timeless enough to look good for years to come.

The world is alive with start-ups, especially those in the technology industry, which is why Share Tech Mono is such a timely free font. If you or your client is launching an app, developer website, or anything tech related, the Share Tech Mono font will provide you with the digital styling you need to communicate the right message to your audience. The font is stylish enough to use throughout your website or in your marketing, and geeky enough to convey a sense of tech savvy.

The Alatsi font to me looks like a twist on more classic fonts from the 50’s, with lettering that contains pointed edges and an elongated stance thanks to the dropped elements in the letters (such as the horizontal line in the “A” or the intersection point of the circular element and diagonal line of the “R”). When you want to convey a bit of class in your logo or titles, look for this font to give you that look. Additionally, the fonts is similar to those used in big-budget campaigns, so using Alatsi in your marketing campaigns may add a bit of production value to your graphics.

This next font, which I’ve used in countless tutorials over the years, is a fantastic all-caps font that works great for headlines and product packaging due to its thicker profile. Because the font is so simple and strong, it stands out well when used against simple backdrops like gradients or single color backgrounds. Small businesses will love Bebas Neue thanks to its versatility in both design compositions and across multiple platforms (thanks to its OpenType format).

The Beth Ellen font is a great take on the class of “Handwriting” fonts – appearing as if it was written in the 18th or 19th century with experienced penmanship from the tip of a fountain pen or quill. For those looking to have a bit of fun with their graphic design, this font can be great entertainment while producing a magnificent final result for the right project.

The Exo font reminds me of a futuristic font – though it’s not nearly as gimicky as other fonts that aim for the same style. Available in 18 different styles, you’ll be able to use this font in a plethora of projects – from extensive branding to one-off promotions that want clean lines, subtle curves, and a variety of weights from the ultra thin to the ultra bold.

If you’re working on a sports- or university-related project, you’ll want to take a look at the Graduate font on Google Fonts. This free font incorporates the college athletics look and feel, without overdoing the slab elements or pronounced angular curves. Rather than having a cheesy ’90’s football-movie font, you’ll get a more crisp and contemporary take on this athletics font.

If you’re looking to make a declaration rather than a statement with your fonts, look no further than the IM Fell English SC font by Iginio Merini. The font, which is part of the FELL TYPES that were original bequeathed to Oxford in the 1950’s, was originally used as in books and other forms of prints. It was created way back in the 1600’s, which is why the font gives any text an historically epic importance. However, even after all this time, the font still looks crisp and modern – and a great addition to any graphic designer’s arsenal.

The Major Mono Display’s font style speaks for itself – it essentially has a modern-art feel to it thanks to the abstract lettering and the differences in typeface style between the capitalized and non-capitalized lettering. All of this creates a truly unique and eye-catching font that will add an artistic flare to your GIMP projects.

The last font on this list was chosen in part because the name is an ode to the free operating system “Ubuntu.” which is one of the more popular versions of Linux. Additionally, the font comes in 8 different styles, making it easy to create dynamic compositions using varying font weights. This font was made free and Open Source thanks to Canonical Ltd, which funded the font’s creation in 2010-11. With styles ranging from light to bold, and each style coming in an italicized version, you’ll be able to use this free font in a variety of projects – mostly for things like titles in digital environments.